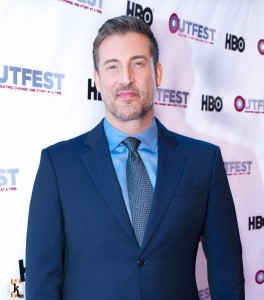 If you a regular at Outfest events then you are familiar with the organization’s personable executive director Christopher Racster.

I’ve just received an email which states he is leaving the organization that he has been a part of for a decade.

“Christopher has decided it is time for him to chart the next course of his career,” stated a letter from Racster and Outfest co-presidents Terry Franklin and Marissa Román Griffith. “Christopher is a beloved member of the Outfest family and team. Under his leadership, Outfest has continued to be the leading LGBTQ arts organization in the world.”

This follows the recent departure of Outfest Programming Director Lucy Mukerjee who left to become a senior programmer of the Tribeca Film Festival.

The letter outlines a few of the key contributions that will define Christopher’s legacy with Outfest:

** The expansion of trans-inclusion across all Outfest programs including initiating the Outfest Anthony Meindl Acting Fellowship, an annual scholarship program for five transgender and non-binary actors.

** The creation of a new strategic plan which focuses on building a pipeline of LGBTQ talent through Outfest’s education and mentoring programs and the eventual expansion of Outfest to small towns in the MidWest and the South who do not have the same access to content and mentoring.

** The expansion of more diverse voices in Outfest’s programs, staff, and Board. In 2017, 50% of the films at the Outfest Los Angeles LGBTQ Film Festival were made by women. And in 2018 over 2/3 of the filmmakers were women, people of color, transgender or non-binary. We also welcomed our first ally to the Board and (not only for the first time, but for two years in a row) Outfest has had two Board Co-Presidents who are persons of color.

The letter also states: “The Outfest Board and Christopher are committed to finding a new Executive Director who will continue to uphold Outfest as a pillar of excellence and ensuring that this transition is as seamless as possible.”