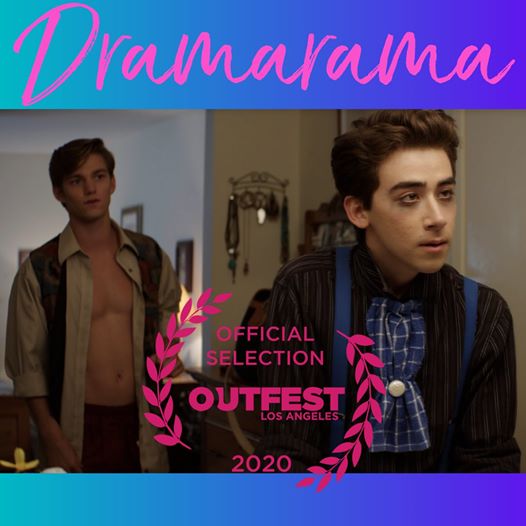 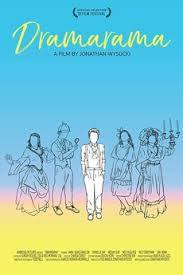 Outfest 2020 kicks off today and even if we can’t all be together at the DGA or Ford Theater as in past years, kudos to organizers for putting together an impressive program to be enjoyed at home – or at an outdoor drive-in!

One of the movies that I’ve just seen and am completely in love with is Dramarama. Jonathan Wysocki’s nostalgic, funny debut feature is a poignant love letter to drama nerds, late bloomers, and the intense friendships of youth. It’s set in 1994 and that makes all the difference when it comes to accepting yourself and being open with your friends. It resonated so deeply with me because it was at that time I was in the process of coming out to everyone I knew. 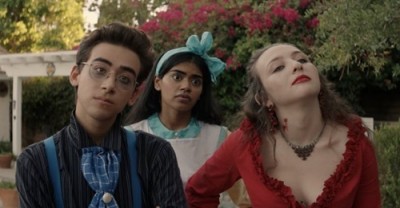 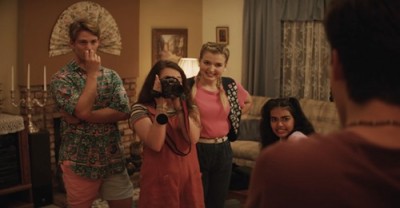 Here’s the film’s synopsis: It’s the end of summer, 1994, and theater nerd Gene is preparing for his high school drama friends’ final murder mystery slumber party. The theatrical hostess, Rose, will fly off to start college the next morning, followed by earnest Claire, magnetic Oscar, and sarcastic Ally. Yet Gene has bigger problems than being left behind by his best friends: he wants to come out of the closet – but is terrified of what his sheltered Christian confidants might think.

Wysocki’s semi-autobiographical film is rooted in his memories of growing up in Escondido, California, as a Catholic, closeted gay teen who flourished in the theatre. 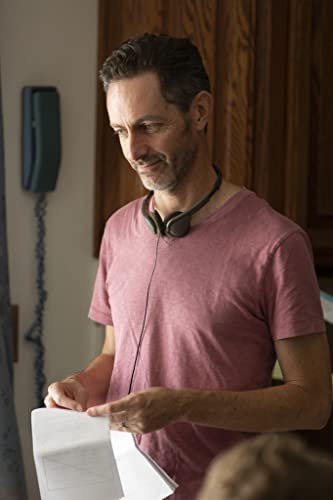 “It was the early 90s, and most peers in my high school were proudly Christian and toed the line on keeping homophobia alive and well,” says Wysocki (pictured, right). “My tightly-knit drama friends and I, however, were full of contradictions: parroting our parents’ conservative beliefs while sneaking out to watch art house films like The Crying Game and The Piano. Looking back, I realized I had never seen teens quite like us on screen. Typically, coming-of-age films favor the rebellious kids who go against the grain and can’t wait to grow up, experimenting with alcohol, drugs and/or sex along the way. We were having bombastic murder mystery parties swilling Martinelli’s non-alcoholic sparkling cider! It felt like there was a cinematic void for the in-betweeners; the uncertain, works-in-progress teens who feared growing up rather than rushing towards adulthood.”

Dramarama is an atypical coming out film in that its queer characters are not granted a liberating “coming out” moment. 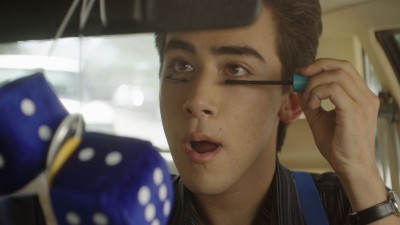 “My community in 1994 had no support network for coming out, so all the LGBTQIA+ kids like me and my friends stayed firmly in the closet,” Wysocki explained. “And while much progress has been made since then, full equality has yet to arrive. To this day, queer kids still worry about what might happen if they come out, and I wanted this film to reflect that reality so young people know it’s okay to wait if you don’t feel safe or ready.”

Those strong feelings and repressions had to be channeled somewhere and drama was the space where Wysocki and friends could express themselves in boundless ways and rarely get called out for it.

“It was a license to be free and let it all out,” he said. “I wanted the close friends in Dramarama to live off the lifeblood of theatrical improvisation, whether it’s bursting into a Sondheim song, inventing a clever double-entendre, or reenacting a scene from the movie Clue. Performance becomes their chosen way to deal with their emotions, inspired by the intense energy, creativity, and humor I witnessed as a drama kid.”

Here is a LINK to the Outfest website so you can access the film once it become available on Saturday, August 22.