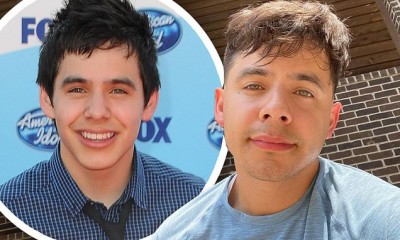 David Archuleta speaks with NBC News about his journey to coming out publicly as LGBTQ.

I admire his courage and honesty when it comes to talking about his Mormon faith and how that has impacted his coming out process. Some people don’t have the patience for people who stay closeted after achieving fame but I think it takes a lot of guts whenever you choose to do it.

Here are some excerpts from David’s interview:

Growing Up: “I always felt like my feelings were different, starting from a younger age, and I just thought maybe I need time to figure this out and I’ll be able to understand this better or work it out. I didn’t really want to be honest with myself, because I was always embarrassed, and really, I was ashamed to feel that way. Just growing up in a religious household, the idea was, ‘Oh this isn’t OK. It’s not right.’”

Fighting the Feelings:“I’m not wanting these feelings. I’m not trying to have them, and I’m not even focusing on them, and they’re still coming whether I want them to or not. I’m not focusing on guys and how attractive they are and anything, but it doesn’t get rid of, just walk by someone, or just look at them and all of a sudden you just feel that boom. And so I was just like, ‘I’m broken; I must have done something wrong,’ and I got to a point where I was feeling so embarrassed and so guilty.”

Coming Out Publicly: “I kind of went through a faith crisis for a month, when I was in the process of breaking up with this girl I was in a relationship with. But I felt so disconnected from everything. My anxiety had gotten so bad. I was like, ‘I don’t even remember how it feels to be close to God or to even have feelings for anybody … I don’t even know how I feel about myself right now. When I had that prayer, God just said, ‘David, you know I trust you, right? I want you to post about what you’re going through right now.’ And it was just so clear what I needed to say. I knew exactly what I needed to say, but I feel uncomfortable saying it, because I like to keep to myself — especially with this kind of stuff. But I just knew I had to.”

Matt Bomer: A man and his horse