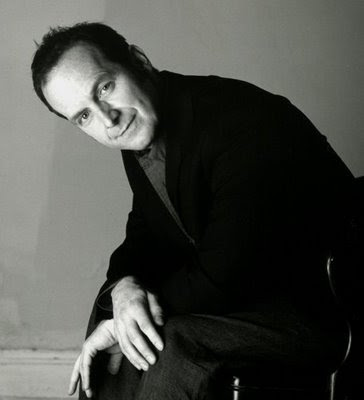 The Tony Award winning actor makes his debut in Sunday’s episode as Russell Edgington, vampire king of Mississippi. He shows up with his handsome afterlife partner of 700 years.

Brandon Voss has a terrific chat with Denis and here are a few appetizers:

The Advocate: It’s great to see you playing a gay character in True Blood. You’ve played gay before in Take Me Out and An Englishman in New York, but you rarely take on gay roles, especially for an out actor. Has that been a conscious decision on your part?
Denis O’Hare: No. Years ago I went in for As Good as It Gets, that movie with Jack Nicholson, Helen Hunt, and Greg Kinnear. I auditioned for the gay part, and after I finished the audition the casting director rolled her eyes and said, “This is a gay character. I’m so tired of people playing gay people like they’re straight. This is a gay man.” I was like, “OK. Should I do it again?” She goes, “Yeah, make it gay!” So I went a little more in that direction, and it was fine, whatever. When we finished, she said, “So how’s your family? You’ve got a wife, right?” I said, “No. I have a boyfriend.” She said, “You’re gay? I thought you had a wife!” It was really revelatory to me that she had some weird assumption about how gay people were supposed to act. Somehow, because I wasn’t acting that way, I couldn’t possibly be gay. It was such a bizarre experience. So I guess to some straight casting directors, I’m not gay enough to play gay.

You’ve definitely played your share of straight jerks. So what did you think about Ramin Setoodeh’s Newsweek article?
I must admit I didn’t read it, so I shouldn’t even speak to it, but of course I have an opinion anyway. It annoyed me, but I thought it was more complicated than the ensuing discussion. I don’t think his point was that gay actors can’t convincingly be straight in roles; I think his point was that once the knowledge is out that those actors are gay, the audience is unwilling to suspend their disbelief. So I felt there was a finer point there that got lost in the stampede. His point has less to do with the ability of actors and more to do with society’s ongoing prejudices and our inability to cut a gay man the same kind of slack we’d cut Julia Roberts if she were playing a nuclear scientist. We could suspend our disbelief for that, but we can’t suspend our disbelief to accept that Sean Hayes is interested in sleeping with Kristin Chenoweth? That’s a problem.

True Blood is known for its gratuitous male nudity. Would you get naked for a scene if asked?
I was asked, and I’m in bed with somebody in episode 10. It’s just from the waist up, but I was wearing a teeny jockstrap thing. I’m 48, so I wasn’t quite hoping that’s the way my career would go, but I’m proud of how I look. I can’t compete with 25-year-old bodies, but I’m in pretty good shape. I did spend the previous two weeks doing a little extra at the gym.

Describe Russell and Talbot’s dynamic 700 years into the relationship.
What you’ll see is a marriage that’s well-traveled and a little frayed at the edges. These guys snipe and complain, but there’s always an incredible deep affection at the base of it. Theo and I worried that there were too many fighting scenes between us, but then we had this lovely scene later in the season, a lovely tender moment, where I finally get to put my hand on his cheek and basically talk about how much I care for him. It was a great relief to have that scene, because we kept talking about that every day of shooting: How do we show the love?

Go to Advocate.com to read the entire interview.