Oscars Recap: Bradley & Gaga were everything, Queen rocks; and 3 of 4 acting prizes are for queer roles! 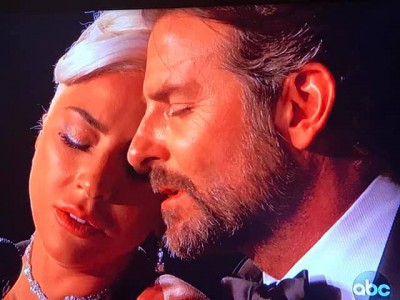 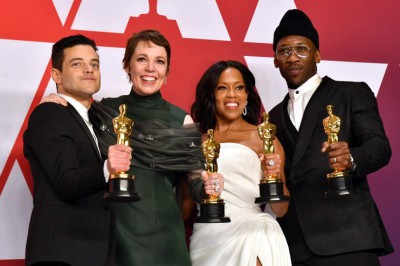 It’s near midnight and I’m reflecting on tonight’s Academy Awards.

This is just my stream of consciousness recap so for full list of winners, go over to EW.com.

I was at a fun house party in Beverly Hills where I drank whiskey, had some ribs and watched the show with a roomful of gay men. You could hear a pin drop when Bradley Cooper and Lady Gaga left their seats in the audience to perform their A Star is Born duet Shallow. It was so beautiful, heartfelt and perfect so it was great to see Gaga and her co-writers win the best original song prize shortly after.

As for the other musical performers, Adam Lambert and Queen opening the show was genius and set a wonderful tone for a host-less evening. Loved seeing Bette Midler perform and Jennifer Hudson too but did not love either of those two nominated songs.

Anyway, I’m thrilled with the queer representation in the acting categories. Mahershala Ali won his second Best Supporting Actor trophy with his work in the Don Shirley biopic Green Book, Rami Malek won Best Actor for his performance as Queen frontman Freddie Mercury, and Best Actress winner Olivia Colman (The Favourite) pulling off a stunning upset over category frontrunner Glenn Close to notch the biggest surprise of the evening.

Colman’s speech was a riot and she was so gracious to Close who lost for the seventh time at the Academy Awards. I very much wanted Close to win but Colman is just as deserving. So the Academy should present Close with an honorary Oscar at the Governors Awards within the next year or so. Glenn won just about every other awards this season (SAG, Globes etc) and has won three Tony Awards and three Emmys.

Loved the Streisand appearance, thought Julia Roberts was a perfect choice to present best picture, and overall, it seemed like all of the presenters had gone to rehearsal.