Oprah Winfrey talks to drag icon RuPaul about life, liberty and the pursuit of fabulous 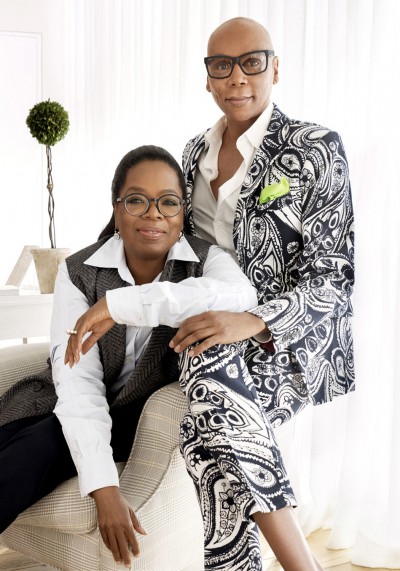 Oprah chats up RuPaul in the latest O Magazine. Here is an excerpt: Oprah: You seem so positive—are you always in the joy space?

RuPaul: Noooo. I work at it every day. I meditate, I go to the gym, and all those inspirational things I say to contestants on the show, those pep talks, I’m actually saying them to myself. I also try to laugh as much as possible. There’s a scene in The Witches of Eastwick where all three women start levitating because of laughter. That’s the most powerful spell you can cast.

Oprah: Why do you think drag is resonating so deeply with people at this moment?

RuPaul: There’s a new breed of young people out there. We do a convention called DragCon, and the kids who come are smart. They’ve almost got a new belief system that’s completely of the 21st century. Our show speaks to that forward-thinking voice. They see the kids on our show overcoming adversities and realize, I can do that.

Oprah: What allowed you to move past anybody’s expectations and carve out a new path?

RuPaul: I think that’s who I am naturally. But also my mother was very, very rebellious. She used to say, “Unless they payin’ your bills, pay them no mind.” I was a sweet kid, so people would hurt my feelings. But you live long enough, you realize that, baby, that has nothing to do with you.