On the anniversary of Karen Carpenter’s passing, let’s enjoy some of her classic music 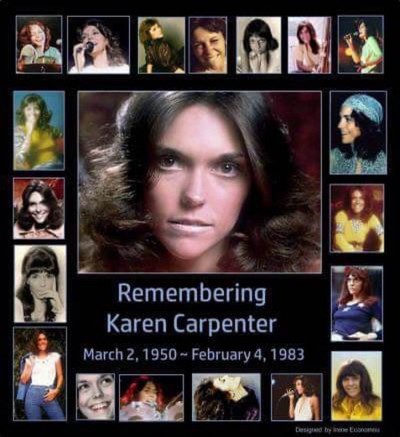 The day Karen Carpenter died is still seared in my memory.

This closeted gay kid was devastated by her death on this day in 1983. She was just 32 and had battled anorexia for years.

I think so many of us gay kids deeply identified with something in Karen’s voice at that time in our lives.

So I never forget to pay tribute on this day – and on her birthday – to this beautiful singer whose songs I would listen to for hours. I’d put a Carpenters album on, put on these huge headphones, turn off all the lights, and get lost in Karen’s voice and her brother Richard’s orchestrations.

Goodbye to Love, I Need to Be In Love, Close to You, Yesterday Once More, Only Yesterday, Hurting Each Other, For All We Know, Superstar, A Kind of Hush, Top of the World and I Won’t Last a Day Without You were some of my favorite hit singles as were such album cuts as Bless the Beasts and the Children, This Masquerade, One More Time, and the duo’s epic version of Don’t Cry For Me Argentina.

What has been so amazing – and wonderful – is that not only has Karen absolutely never been forgotten, but her legions of fans have kept her music alive.

I’ll never forget a few years ago when I was hanging with two of my besties at their home in Newport Beach and we got on a 70s music kick and started playing Elton John, Queen, Captain and Tennille and finally, The Carpenters. Once we got onto The Carpenters we just kept playing them one after another and singing at the top of our lungs (sorry neighbors!).

We did Top of the World, Please Mr. Postman, Rainy Days and Mondays, We’ve Only Just Begun and even Calling Occupants.

It was an absolute blast.

We are thankful Karen lived long enough to leave us such a treasure trove of superb music that we can continue to enjoy.

Here is some of it: