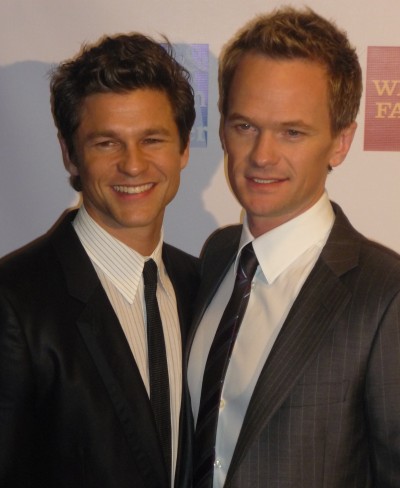 “We are so honored to be here on the 40th anniversary of this incredible and important institution,” Harris said before slipping into humor and adding: “It’s hard to believe that it’s been 40 years since The Center first invented gays and lesbians. And we are so happy that they did.”

David, taking on the straight man role if you will, added: “More to the point, we are extraordinarily grateful that we are able to stand here today as a same-sex couple with children and not feel like we are some kind of freak show or some kind of government experiment gone awry.”

Neil then paid tribute to other famous gay parents before them like Dan Savage and Cynthia Nixon, BD Wong, Cat Kora. Ricky Martin, Sara Gilbert, Clay Aiken, Rosie O’Donnell, among others who he described as “courageous people who stood tall long before it became acceptable to do so.”

“The fact is, David and I don’t even consider ourselves true activists. There’s a lot of other people who do that heavy lifting. Sometimes we choose to raise our voices so that the world can hear us but other times we just, frankly, we just want to curl up at home and be a family together.”

Neil pointed out that that is part of the great change The Center has brought about in the last 40 years: “They, and all of you, are helping create a world where, for the first time, for gays and lesbians being married and being a parent doesn’t have to be about making a statement. Instead, it can just be about living our lives.” 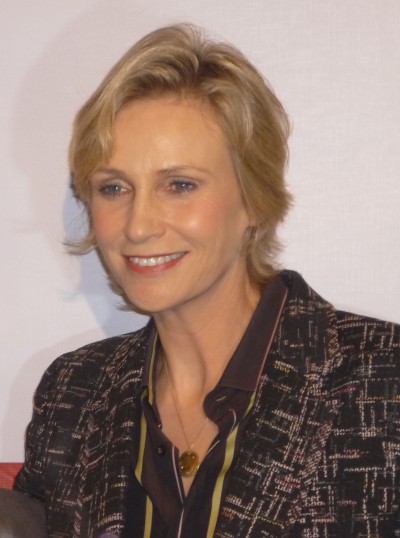 It was Jane Lynch who presented the award to Harris and Burtka who received a standing ovation from the crowd at the Westin Boneventure Hotel in downtown LA.

“As a couple they are beyond extraordinary and created the most stunning gay American family portrait,” said Lynch. “Now, it doesn’t hurt that the babes are cuter than Bradjelinas. They really are  – Gideon and Harper – they’re just delicious. Of course it doesn’t hurt that David and Neil themselves – and I quote from Glee when I say – are gorgeous, easy on the eyes, handsome, and they’;e gorgeous. To much of the world they are a remarkable family and they stand as a role model for young people. This is particularly important for kids out there who fear for their own futures because of their own sexual orientation…. The role that David and Neil’s family play in showing the world what our families can is so important. … We are here to thank David and Neil for deciding to let the world see how lovely they are. Thank you David and Neil for putting beautiful face on Amnerica’s notion of what a gay family looks like.” 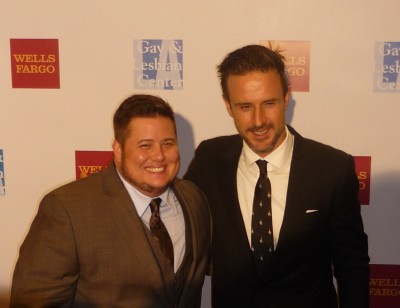 David Arquette was sweet and funny as he presented his fellow Dancing With the Stars alum Chaz Bono with the Board of Directors Award.

“We’re all in such awe of the bravery that you showed in stepping up into the world and showing them what it’s like to be a transgender person in this world. You did it with dignity, you did with such strength.”

Arquette pointed out that Chaz’s actions hit home on a personal level because of his transgender sister, Alexis Arquette.

“I grew up sharing a room with Alexis, my sister, who we all love. I saw how difficult it was for her to come to terms with that, to feel comfortable in her own skin.”

Getting back to Chaz, Arquette said his DWTS experience was “amazing” and “important for you to show the world that it’s normal to stand up there. The effects of that will shine on in the future. It’s just the beginning.” 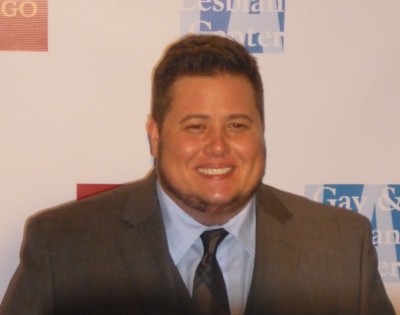 Chaz, the only child of Cher and the late Sonny Bono, took the stage to a standing ovation and said: “It’s really an honor for me to receive this award tonight. I’ve been doing stuff for The Center since I came out the first time which was in 1995. It’s just such an amazing organization.”

“For me, growing up, I didn’t know about being transgender. I didn’t know that it was an option. I did know about gay people and I grew up in a home with so many beloved gay and lesbian friends so it made it so much easier for me the first time I came out because I had these positive, strong gay role models. When I discovered I was really transgender, I felt like my world was going to fall apart. It took me over 10 years to come up with the courage that I needed in order to start transitioning and finally be myself. [applause]. One of my goals since starting my transition – and believe me when I say if I could have done it privately, I probably would have done it years ago – the idea of having to transition in front of the whole world was something that really terrified me. So when I finally did get the courage to do it, I wanted to take the opportunity to try and do it in a way where I could educate the public and shine light on what it means to be transgender. So many people just don’t have any information about that and that includes the gay and lesbian community. We say LGBT and it kind of roles off our tongue but the B and the T are kind of like the stepkids at another table. I’d like to challenge everybody here tonight to really take the time to learn a little bit more about what it means to be transgender, how it’s different from sexual orientation and some of the struggles that we go through.”

Chaz was taken on a tour last week of The Center and when he saw all of the services available there for the trans community and finding that out, he said, “made this award even sweeter for me.”

“There’s an opportunity for transgender Angelinos to really get the services and support that they need and that’s really hard sometimes for people to find and when you don’t get the support that you need as a transgender person, really horrible things happen.” 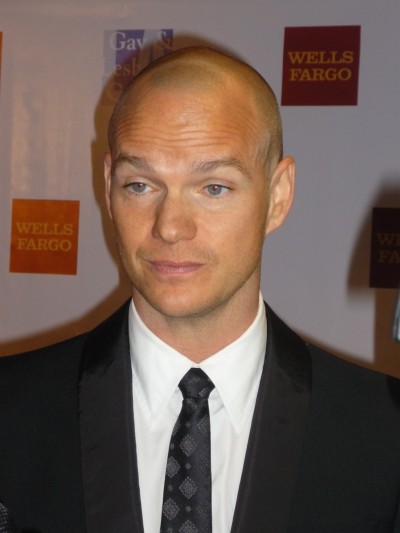 Actor-writer-director Peter Paige, best known for his role as Emmett on Showtime’s Queer as Folk, is a member of the center’s board of directors and got choked up when he shared with the crowd why The Center means so much to him.

“I know only too well the power and importance of The Center in transforming one’s life,” Paige told the crowd. “When I came to LA some 15 years ago, I was a scared and lost and lonely and broke young gay man. And somebody suggested that I might be able to find some help at The Center. I made my way in and I started seeing a therapist there for $10 a week. It was all I could afford and it was all I needed. Every time I tell the story, I get choked up. There is a direct line from that scared young man to the man that is standing before you and it goes right through The Center.”

“I was with a couple of friends recently and one of them asked me, ‘What do you think the most important service that the center offers?’ I thought for moment and said: ‘It’s whatever one you need. If you’ve recently been diagnosed HIV-positive, it’s medical services. If you’re a victim of domestic violence in your home, it’s domestic violence prevention. If you’re trying to get clean from crystal meth, it’s addiction recovery. If you’re elderly and gay and isolated, it’s senior services. If you’ve been kicked out of your home for being gay, it’s our transitional living facility. For the last 40 years, The Center has always stepped up when confronted with a crisis and I am proud to say we continue to do it today.” The Center’s CEO Lorri L. Jean (pictured with Burtka and Harris) has been known to give stirring speeches but on this occasion, she was at her best. She paid tribute to those who laid the groundwork in the early days. While she educated the crowd about all that had been done, she also reminded them of all that is left to do.

“365 days a year, our community turns to the center for help.” she said. “So, as long as we are treated as second class citizens, as long as HIV and AIDS continue to be on the rise in out community, as long as LGBT seniors need outside care, as long as misguided parents kick their LGBT kids out, as long as any LGBT person feels ashamed because of their gender identity or for who they love, the center will be here.”

“Over the decades, we have held true to the vision of taking care of our own and fighting for our place in society.”

The gala also included performances by Miss Coco Peru (aka Clinton Luepp) and Jennifer Lee Warren who sang a rousing rendition of I Am What I Am. Four individuals who have benefited from The Center’s services – a transgender teen, a lesbian who was homeless, an HIV-positive man, and a man – now the father of four adopted sons with his partner of 25 years – who talked about being a scared homeless teen more than 30 years ago and being taken care of by The Center. Leslie Jordan hosted the evening and had several costume changes to reflect each decade of the center’s existence. At one point, he walked out in a giant rainbow afro wig as a tribute to the 70s and said: “In the 70s, I had red hair and I grew it really long and I wore platform shoes. I looked like a rock and roll troll dog.”

Later, in a nod to the 90s, he came out dressed as Madonna during her Truth or Dare period complete with the pointy breasts: “The really sad part about all of this,” Leslie said, “is that this is not even the lowest I’ve gone.”

The red carpet scene before the dinner was about as star-studded as I can ever remember. It was also very orderly and civilized with the stars making time to chat with everyone. I missed the opportunity to chat up Mr. Arquette who I’m just crazy about but in the coming days, I will be sharing with you my chats with Chaz, Neil & David, Miss Lynch, Mr. Jordan, Mr. Paige, Miss Peru, Meredith Baxter, Sara Gilbert, retired baseball pro Billy Bean, Chandler Massey, and Sean Maher. Also spotted on the red carpet were Mike Manning, Geri Jewell, and Karina Smirnoff. FILE UNDER: Benefits, Out Stars