Anderson Cooper on love being the greatest thing 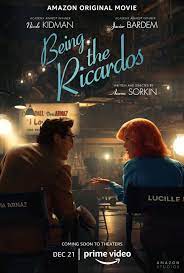 Watched Being The Ricardos last night and give it two enthusiastic thumbs up.

The movie rests on the performance of Oscar winner Nicole Kidman as Lucille Ball and she delivers on so many levels.

After this movie is widely seen, the doubts about her casting should be erased. She plays Lucille Ball the actress and wife with little bits of Lucy Ricardo here and there. We also see how tough Miss Ball could be on writers and directors in her quest for perfection.

It was all quite fascinating and interesting as we go through a very critical week in the run of I Love Lucy and in the lives of Miss Ball and Desi Arnaz. I also like that people who only know Miss Ball from her sitcoms will see that she was a prolific movie actress (The Big Street, Too Many Girls, Stage Door) for decades before I Love Lucy and a popular radio star (My Favorite Husband).

Javier Bardem as Arnaz is very good as are J.K. Simmons as William Frawley, who played Fred Mertz on the sitcom and Nina Arianda as the great Vivian Vance who won an Emmy for playing Ethel Mertz.

Being The Ricardos will be released in select theaters on December 10, 2021 before being available to stream on Prime Video on December 21, 2021.

Anderson Cooper on love being the greatest thing