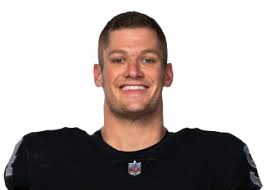 As expected, an openly gay man played in an NFL game without causing a disruption, without scaring anyone in the locker room, and with the Earth somehow continuing to spin on its access.

Las Vegas Raiders defensive end Carl Nassib, who came out publicly during the off-season, started his Monday night by making history as the first openly gay athlete to play in a regular-season NFL contest.

He also making the game’s most important defensive play when he forced an overtime fumble that led to his team scoring a 33-27 victory over the visiting Baltimore Ravens.

“It was really special,” Nassib said after the game. “I’m really happy that we got the win on the day that kind of made a little bit of history. I’ve played in a lot of games, now this is my sixth year, I try to make sure I really remember every single game. I won’t forget this one.”