Neil Patrick Harris, partner David Burtka, are each biological father of one of their twins 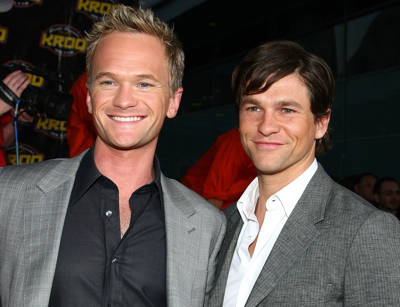 Hope you are not confused by my headline!

So as you well know, the 2010 Greggy winners for Couple of the Year Neil Patrick Harris and David Burkta became parents of twins in October.

In case you were wondering whose sperm was used to inseminate the surrogate mother, here is your answer: “We inserted two eggs, one with my sperm, one with David’s sperm and they both took,” he tells People Magazine.

David said holding their children in the delivery room shortly after their birth was “just absolute joy,” says Burtka. “We had two babies that we made. With help.”

“Everyone says that it’s such a blur after it happens,” says Neil says of becoming parents to fraternal twins Harper Grace and Gideon Scott, born Oct. 12 via surrogate. “I find myself constantly just trying to wrap my mind around it.”

The family just moved into a “more kid-friendly” home in the Hollywood Hills and the twins have a new nursery with an old-school Disney theme park décor.

“Harper has been fussy but Gideon is the easiest baby in the world,” says David. “They’re just now starting to recognize us and smile.”

Adds Neil: “I just love the way they smell. And we can use them as an excuse to get out of almost anything. That’s cleared the calendar in a good way.”

For more of Harris and Burtka’s interview, including exclusive photos of their twins, pick up this week’s issue of PEOPLE on newsstands Friday.