My review of the fun and entertaining “Burlesque”

After seeing Burlesque the other night in Palm Springs, I realized that this was only the first tine I will have seen this flick starring Cher and Christina Aguilera.

It is destined to join such gay faves as Steel Magnolias, Beaches,  and Cher’s Mermaids as the kind of guilty pleasure you watch over and over again. It’s not that these movies are masterpieces, but they all star icons having one helluva time on screen.

Burlesque is Cher’s first starring role in ages and she plays the owner of a club on Sunset Boulevard called the Burlesque Lounge which is on its last legs. In walks a young girl from Ohio played by Christina Aguilera who can sing and dance like nobody’s business. But we won’t know that for awhile. She’s just serving drinks and hoping for a chance to audition to be one of the dancers at the club.

This is the perfect showcase for Aguilera’s film debut. She’s got the pipes to make you believe that once she gets to perform, she’s such a sensation that attendance soars and she is the toast of the town.

She and Cher have some good scenes together with the best being when Cher teaches the younger diva how to put on make-up. The rest of the cast is filled with talented folks led by Stanley Tucci who plays Cher’s gay best friend and right hand man. It’s a fun chemistry Cher and Tucci share and I love that we get to see his character pick up a really cute guy at a wedding and bring him home.

The main male character is a bartender (and songwriter) played by Cam Gigandent who becomes Aguilera’s roommate and eventually her love interest. He is very, very sexy in this film!

The highlight for me was when Cher, whose character of Tess was about to lose her club, belted out the power ballad You Haven’t Seen the Last of Me. I’m hoping the song, written by Diane Warren, gets an Oscar nod for outstanding original song written for a motion picture. That way we can see Cher perform at the Academy Awards and talk about what she wore for days afterward.

It’s interesting that during that number, I was transfixed by Cher and thought back to her days on the Sonny and Cher Comedy Hour and her hits from the 70s, 80s, 90s and beyond and I thought, ‘There she still is, looking as fabulous and sounding as powerful as ever.

The woman has taken care of herself! 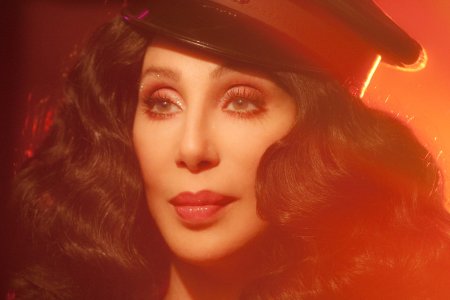