My red carpet chat with Jane Lynch and Lara Embry! 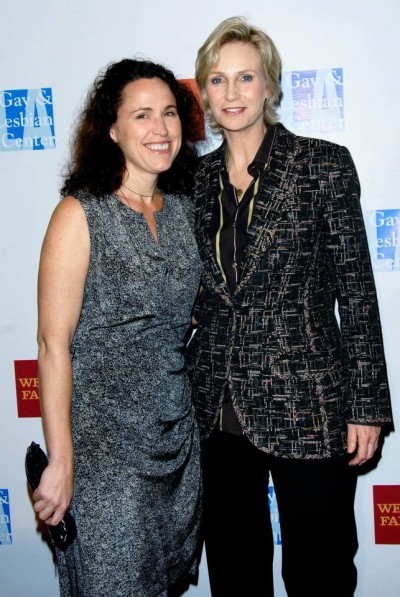 When Jane Lynch and I met on the red carpet of the LA Gay & Lesbian Center last Saturday, the Emmy-winning Glee star immediately straightened my tie which was a little crooked.

I reminded her that a few years earlier, she had become a little distracted my a tiny hole I had near the shoulder of my favorite old sports coat that I no longer wear.

“Oh my God I’m always picking at you!” she said apologetically as wife Lara Embry laughed. “I’m just a picker.”

I assured her that it was all right by me.

Jane looked so happy and relaxed that I wondered if life as a superstar – after decades as a busy and successful character actress – had become more manageable.

But Lara, who she was married to last year, thinks they have because they are now in a new home they had built that she describes as “calming.”

“Ever since we’ve known each other we’ve been building this house,” said Jane. “So yes, things have started to level out – especially now that we live in this house. It feels so good. I sometimes still feel a little overwhelmed but its all good.”

The couple also shared with me their thoughts about last week’s Glee episode called “The First Time” where couples Kurt and Blaine and Rachel and Finn had sex for the first time. Groups such as the conservative Parents Television Council were up in arms before the episode even aired.

“I think they did a great job with that episode, I thought it was so sweet and tender,” Jane said. “We had Rachel and Finn having their for first moment and I thought they did that tastefully. Nobody was humping each other. They basically showed these kids post-coital if you will. It was just tender and sweet. If you have a problem with homosexuality, then maybe you have a problem with that.”

Added Lara: “What they are upset about is their own issues.”

Jane went on that night to present the evening’s other high-profile couple, Neil Patrick Harris and David Burtka with the Rand Schrader Distinguished Achievement Award.