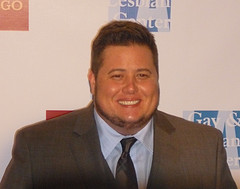 Chaz Bono will return to ABC’s Dancing With the Stars for next week’s finale along with all of the other contestants from this season.

And yes, he will dance.

Last Saturday, I chatted with the man who in the past year-and-a-half become the most famous transgender person on the planet.

He was an honoree at the LA Gay & Lesbian Center’s gala and we had a quick gab on the red carpet.

I wondered how he was feeling physically after the wear and tear of his stint on DWTS.

“I actually started to feel good even towards the end of when I was dancing – from about week four on I was starting to feel pretty good,” he said. “Your body just adjusts.”

Chaz, the only child of Cher and the late Sonny Bono, has emerged as a major public figure in his own right with DWTS as well as the documentaries Becoming Chaz and Being Chaz and a recent memoir.

I remarked that watching him on DWTS, he just seemed happier now than ever before.

“I’m definitely more happy since I transitioned,” Chaz said. “I had great time doing Dancing With the Stars, it was an amazing, really amazing, experience. It pushed you in as lot of ways that really build up self-confidence that you didn’t know you had.”

Although Chaz was eliminated at around the halfway point of the season, he was surprised at the level of support he got from viewers – especially considering there was some pushback prior to the season from transphobic forces.

“I got a lot of support which is kind of overwhelming,” he said. “I don’t know exactly how it works but it just seems to be working. I think if people just get to know somebody and like somebody and it’s not threatening, they start to get a lot more comfortable.”

Chaz believes that that American society will continue to evolve and become more hospitable to LGBT folks.

“There’s always going to be people that discriminate against other people but I think it will be much less acceptable,” he said. “I think it will be in the way when somebody makes a racial slur and everyone sort of gasps. I think it will be how are now looking back on the civil rights movement. We will look back at the LGBT movement similarly.”