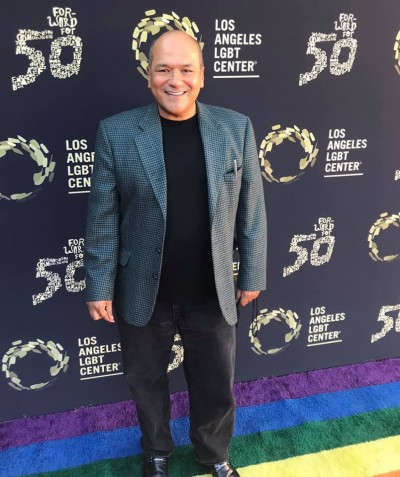 This was truly a night to remember.

In case I don’t make it clear enough, I am so honored to be one of the nearly 800 employees at the Los Angeles LGBT Center. To be the writer-reporter for the Center’s Marketing & Communications department is such a privilege and a joy.

Margaret Cho narrated huge chunks of the program and the appearances of founding Center Board Member John Platania and early volunteer staffer and board member Lillene Fifield were emotional highlights.

I’ll be posting more about this extraordinary night in the coming days but for now, I share with you some of the photos I managed to snap on the carpet between interviews.

Got to interview a pair of national treasures tonight at the Greek Theatre. Was very moved by the commitment to the @lalgbtcenter shown by Lily Tomlin and Jane Fonda who both took part in the Hearts of Gold 50th anniversary extravaganza. #lilytomlin #janefonda #lalgbtcenter #graceandfrankie

Was interviewing Kathy Griffin tonight on the rainbow carpet when Jenifer Lewis popped by. It was that kind of night at the @lalgbtcenter Hearts of Gold 50th anniversary show at the @greek_theatre @kathygriffin @jeniferlewisforreal #kathygriffin

Some of my rainbow carpet shots from the @lalgbtcenter Hearts of Gold 50th anniversary celebration. I chatted with @hayleykiyoko @janefonda Lily Tomlin, @kathygriffin @jake.borelli @nicosantos @zekerchief @karamo @bobbyberk @Rufus wainwright and more and snapped some photos when I could. #lalgbtcenter