My defense of “Cats” 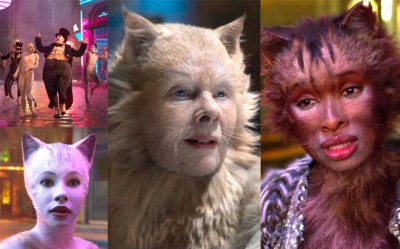 Saw the movie version of Cats last night at the ArcLight in Hollywood.

I was prepared for the worst.

The ArcLight employee who introduced the film jokingly warned the half-filled theater that he would be available outside if there’s an issue with the sound or the picture “or if you just need someone to talk to” because of the movie.

It was all in fun and my friend and I indeed went in prepared to hate watch the thing because of all the negative buzz we’d heard. We agreed that we had to see it for ourselves.

Big group arrived after us, all carrying glasses of wine, and were loud from the start laughing at anything and everything.

I was amused by their reactions at the very first then started to become annoyed because there is plenty in this film to appreciate and enjoy. I watched it as someone who loves musical theater and since I had somehow never seen a stage production of Cats, I wanted to see how it all unfolds.

Oscar winner Jennifer Hudson delivers an emotional wallop as Grizabella and does not overseeing the show’s power ballad Memory. James Corden is an absolute comic delight as Bustopher Jones and fares far better than the other main comic relief Rebel Wilson as Jennyanydots.

Dame Judi Dench brings the proper regal bearing to Old Deuteronomy and it’s wonderful to see this acting legend get a major role in a movie musical in her mid-80s. I especially liked film newcomer Francesca Hayward who is dynamite and whose skills as a ballerina are put to good use.

Also, Idris Elba is damned sexy – even as a villainous cat!

Glad I saw Cats! See it and decide for yourself.