My day at the LA Pride Parade and festival! 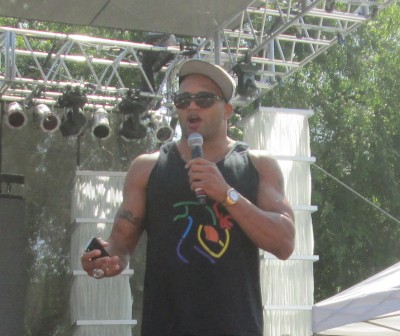 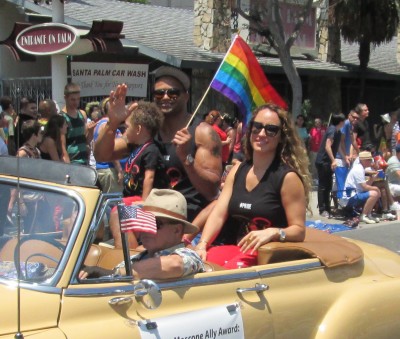 I’m feeling a little sunburned and all kinds of tired but what a glorious time it was this weekend at the LA Pride festival and parade.

I saw all kinds of friends and people I like and admire and loved the feeling of community and fun.

NFL star Brendon Ayanbadejo, recipient of the festival’s George Moscone Ally Award, rode in the THREE-HOUR parade then took to the main stage at West Hollywood Park and talked equality.

‘It’s important for me to get all my straight allies in the NFL to team up with you guys. Together we can get there,’ the former member of the Baltimore Ravens said. ‘We all know that at the end of the day, love wins baby!’

Brendan, who was dropped by the Ravens after they won the Super Bowl, has been working hard for the LGBT community including writing an AMICUS brief to the US Supreme Court supporting the repeal of California’s Proposition 8.

‘I’m cheering you guys on,’ he told the crowd. 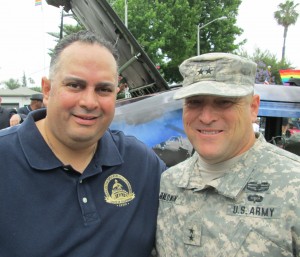 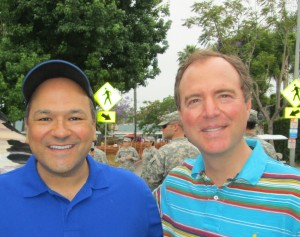 Before the parade, I gabbed with a bunch of the politicians as they waited to get into their cars. Among them was California Assembly Speaker John Perez who told me he would be riding with National Guard Major General David Baldwin who I was introduced to.

Then I spoke with US Congressman Adam Schiff (I’m pictured with him on this page) who has really emerged as a leading ally of the LGBT community. I wanted to tell him how deeply moved I had been by his reading the day before at the closing ceremony for AIDS/LifeCycle.

I’ll by writing about the closing ceremony in a separate post tonight or tomorrow and sharing photos but want to mention here that Mr. Schiff vows to ride the final day with riders next year – only having to be on hand for a congressional vote will stop him!

The there was US Congressman Mark Takano who I ended up doing a little interview with and will share that in a separate post tomorrow. He was most impressive and comfortable as the few openly gay members of the US House of Representatives.

He was at the parade as LA Pride’s Person of the Year. 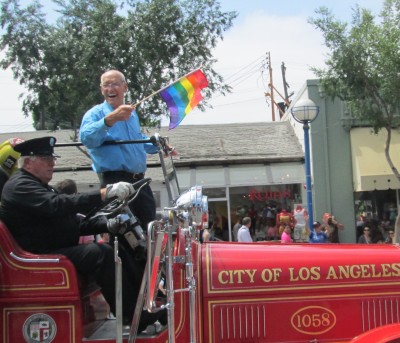 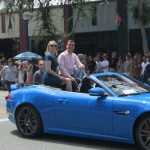 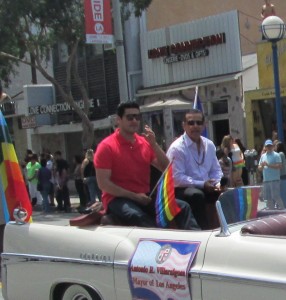 I did not get to chat with but was happy to see in the parade LA City Councilman Bill Rosendahl - recipient of Pride’s Lifetime Achievement Award – who is leaving the council at the end of this month. He has fought cancer and other health setbacks but there he was on the front of a fire truck in the parade.

‘Happy pride! Happy pride! What a beautiful day,’ Villariagosa said as he was driven by sitting atop the back of a convertible.

The mayor was one of the only people in the parade with their own microphone to use along the route! There is no denying that he has been a steadfast and vocal supporter of the LGBT community throughout his two terms in office and that is much appreciated by many. 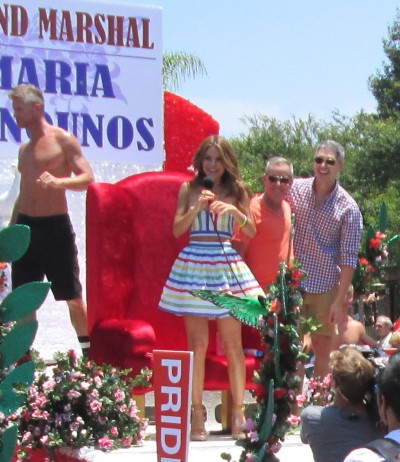 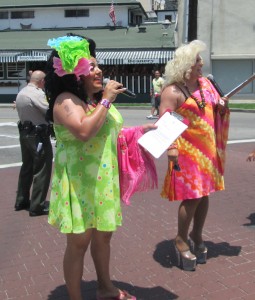 The had been some grumbling about TV personality Maria Menounos being named grand marshal since she isn’t a lesbian and her work on behalf of the LGBT community may not be that well-known.

But it must be said that she was an absolutely lovely and engaged grand marshal.

When she stopped at the judge’s stand, she was “interviewed” a bit by two of Chico’s Angels: drag stars Kay Sedia and Freda Lay.

‘Thank you so much for having me,’ Maria said. ‘This is the best day of my life!’

Kay Sedia then asked some silly questions such as: ‘You’re Grand Marshal, are you related to Garry Marshall.’ Then she got her last name, Menounos, mixed up with Menudo.

(BTW, another edition of Chico’s Angels is due at the Cavern Theatre (in the basement of Casita del Campo restaurant in Silverlake) and I will be there with bells on) 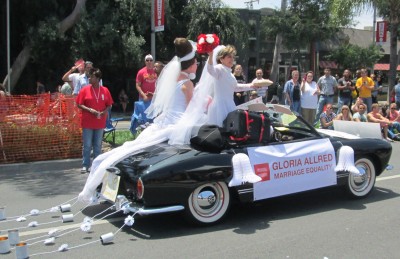 Meanwhile, well-known attorney Gloria Allred, who often champions LGBT causes, is a regular presence in the parade and this year dressed as a bride complete with another bride, bridesmaids and ring bearer and flower girl.

What a wonderful weekend it was. I wanted to stay for The Pointer Sisters but had to get home and start writing. And drat! Swung by the GLAAD party at Sur Lounge for a bit but left before the arrival of Robbie Rogers, the openly gay MLS star. I met him last month but would have been nice to see him again! 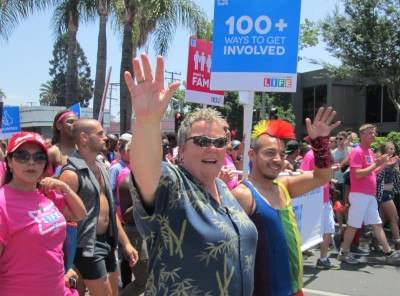 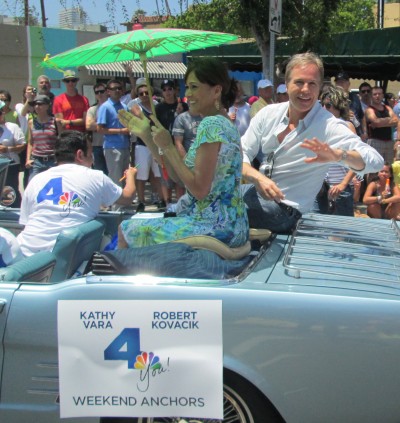 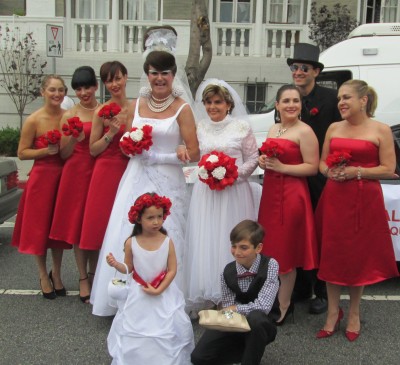 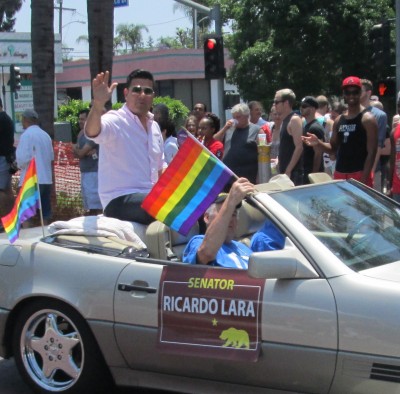 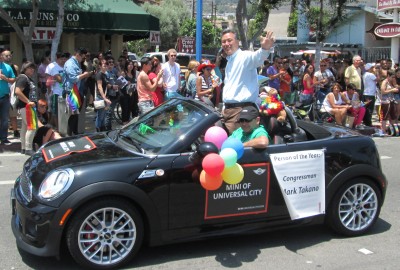 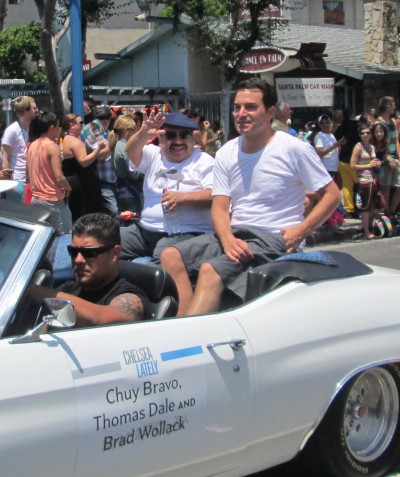 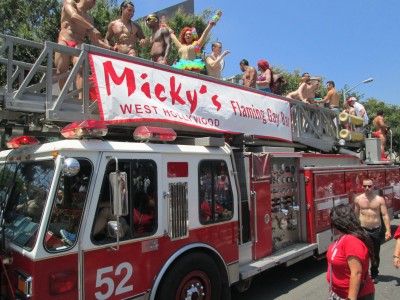 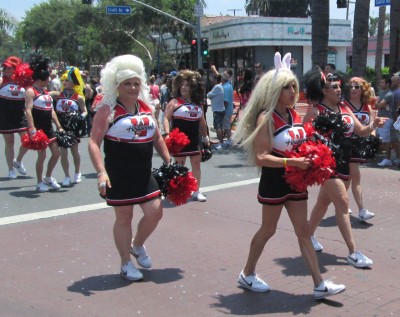