Ryan Murphy has had a lasting commercial and critical hit with FX’s Nip/Tuck. But the phenomenal success of Fox’s Glee has given this 43-year-old out writer-director-producer true mainstream success.

We spoke yesterday at the Hollywood Radio & Television Society luncheon about a variety of topics including his thoughts one of his young stars, Chris Colfer, coming out on E!’s Chelsea Lately a few weeks back. Ryan was completely supportive and also thrilled with the show’s four Golden Globe nominations this week (It added a SAG Award nomination earlier today). “I was very proud of the show,” he said of the Globe nods. “But I was so happy about the actors, particularly for Matt [Morrison], Lea [Michele] and Jane [Lynch], all of whom have worked so hard and so long and this is kind of their first big awards season. Particularly Jane who has worked for years and years and years.”

Lynch’s evil gym teacher and cheer adviser Sue Sylvester has been the breakout character: “”Sue will never take a backseat on the show ever because Jane is so fantastic and we write so heavily toward her… people love her. If you thought she was bad in the first 13, she’s doubly wicked and funny in the [rest].”

I remarked that it was a given that the gay audience would embrace the show but wondered if Matt thought it would be too tough to win over the mainstream.

“I always felt the thing about the show was that if you just watched it, you would like it – if you just gave it a chance,” he said. “I think when people first heard the idea they were like, ‘Well, that’s not for me.’ But what we find is once fathers watch it with their daughters, they get hooked on it, boyfriends get hooked on it. My family couldn’t be more unlike me resisted then grew to love it.”

“I just think you had to fall in love with the characters,” he added. “It’s a very universal idea that everybody feels like an outsider, I think that’s what the show’s about. Everybody feels that way no matter how popular or famous or rich you are.”

The show is taking a four month break before returning in April for the remaining nine episodes of its first season and will air after American Idol. 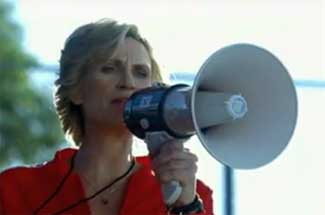 What does Ryan have up his sleeve for viewers?

“We have 10 Madonna songs in one episode – a huge amount and I’m really excited about that,” he said.  “I’m really excited about Kristen Chenoweth coming back, she’s such a doll and I love writing for her and I love pitching songs that she’s never sung. And we have a couple of really big top-secret guest stars who I can’t say. Childhood idols of mine. … They love the show and wanted to do it.”

Updated: To read more about what is in store for the rest of the season, see Jennifer Godwin’s article over at E! Online. I was next to her on the interview line and she elicited the above information about upcoming episodes.