My chat with CMT’s Cody Alan about coming out 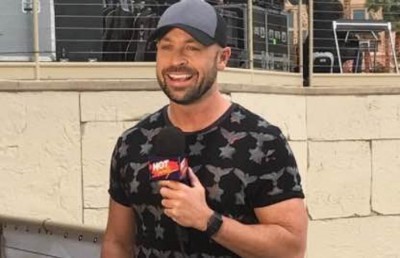 Cody Alan may have been one of the most visible faces in the country music world but it turns out fans didn’t really know him.

They did not know that the 44-year-old CMT television and iHeartRadio host is gay until he took to Instagram in January and told them so.

Cody told me recently he was hoping for the best but really did not know how people would take this personal revelation.

‘I didn’t know what to expect,’ he said at the recent GLAAD Media Awards in Los Angeles.

‘I thought there might be some negativity in a big way but there really hasn’t been. People have been overwhelmingly kind. And that goes from the A-list artists who have spoken up since I cam out to real life people living their life every day as LGBTQ.’

Holding hands with Trea Smith, his boyfriend of more than one year, Alan said they had been quietly attending events as a couple and weren’t exactly hiding.

But the social media announcement really did change everything.

‘I would have never expected to be received so warmly in country music,’ Alan said.

‘But country music is a little bit different than it was years ago as is the world in general. People are a lot more open-minded and willing to accept and also incredibly loving.

‘Country music songs are often about warm, heart-felt things – real-life stories and mine is honest and it’s real and I think people have been moved by it and I think also very accepting of it,’ he added.

Alan is the divorced father of two teens and is on good terms with them and his ex-wife.

He had let them and his employers know he was planning to go public ahead of time.

‘CMT is an amazing place to work so i was received from the time I told them – which was before I came out publicly – as warmly as I could have imagined and they were incredibly kind and said, “Just tell us when. We’ll help you.” They have been great.’

As they did at the GLAAD event a week earlier, Alan and Smith walked hand-in-hand down the red carpet of the 52nd annual Academy of Country Music Awards in Las Vegas last week (2 April).

‘Being open is a whole new world,’ he said. ‘We can openly express ourselves at events like this and on Instagram we can post photos together. We don’t have to feel like we are living this sort of secretive life behind the scenes. And knowing that the audience and the artists have been so kind and loving to us, it makes it more gratifying.’

Alan is noticing how much more open people are with him now.

‘Not a day goes by I don’t hear a story from someone who has been moved in their own way, desiring to be more honest in their own lives,’ he said. ‘And not just LGBTQ, just people wanting to live an honest life who haven’t admitted something for a long time. We all go through something. We’re all dealing with our own issues and challenges.’

got to jump to soar! #redcarpet @treasmith #ACMs