After watching him steal the show at an Outfest panel for Glee last month, I knew actor Chris Colfer was a riot. But a few days ago at the Television Critics Assn. Summer Press Tour event, we didn’t hear much from Chris because the stage was crammed with a dozen cast members plus showrunners etc.

But he did manage this gem when each cast member was asked what they themselves were like in high school: “I was like president of like 20 different clubs, um, but had no friends…. “I was kind of a lone duck in a pond who spent all his time criticizing people around me.”

So after things wrapped, I made a beeline for the young actor to chat about what is in store for his character of Kurt Hummel who will be the show’s first openly gay character and is the first TV acting job for a guy who, at 19, is just a year out of high school himself!

“I think I can say, as the [cast member] closest to high school, that this is exactly what my high school experience was,” he said of the show. “It’s very truthful, it’s very real and I think it’s about time we have something like that instead of like 90210 where everyone is so freakishly good looking that you can’t even relate to anyone.” 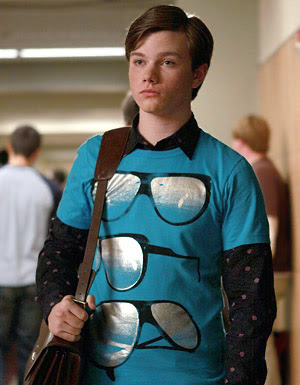 I wondered if that mirrored Chris’ high school days at all.

“Not really,” he said. “I didn’t really care. I was so focused on the future, I really couldn’t care less. Actually, one episode, there’s a song that I sing, and every year when I was in high school, I would beg, beg the drama department to let me sing this song, and they wouldn’t because I was a boy. I always like to sing high songs because my voice is so high-pitched, and that’s actually the storyline of the episode.”

Okay, what song is that?

“It’s Defying Gravity from Wicked.” he said. “I don’t know if I’m supposed to say that, but oh well, there you go.

Since I know a lot of gay kids will be watching Glee across the country, I wondered what Chris thought about Kurt possibly being a role model for them.

“I think a lot of times, characters like Kurt are the constant punching bag, or the constant punch line, but I think Kurt is one of the few who is his own character,” he said. “He does his own thing. He’s a real person, not just the joke of the show. So I think it’ll be very good for them to see a person with an actual soul up there, not just a gay character in the background making fashion jokes. This is a kid who goes through crisis in his life because of it.”