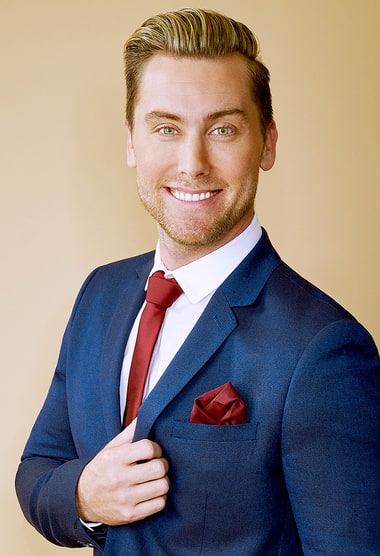 Former NSYNC boy bander Lance Bass is having such a good time hosting Logo’s Finding Prince Charming that he’s hoping for a nice, long run as its host.

‘It’s my favorite job I’ve ever had,’ Lance told me at the Los Angeles LGBT Center’s Vanguard Awards last weekend.

‘Like seriously I love television but something about reality and competition, I’m just obsessed. Big Brother, The Bachelor, we watch them all. That I get to be the host of one of these shows is just like a dream come true.’

Bass believes the gay dating show, clearly modeled after ABC’s The Bachelor, is connecting with viewers.

The show was rocked before its premiere by the revelation that its season one star, Robert Sepulveda Jr., had worked as an escort in the past.

‘First seasons are always tricky because you are just getting your feet wet,’ Bass said.

‘I was very impressed at how real everything was and how smart these producers have to be. It really is an art form.’

Bass keeps up with reaction to each episode on social media.

‘It’s the most tweeted out show on Thursday nights and people have some really strong opinions about everything which I love. It’s getting these great conversations going because there’s many layers to our community and I think we hit on a lot of those on this show.’

He enjoys watching the episodes himself.

‘You shed tears, you laugh and you get really pissed at people too and I like that. You have all these random people in a house and I love social experiments.’

If there is a season two and three is Bass up for it?

‘You bet. I’m already thinking of the next cast. I can think of at least 10 guys who I think would be an amazing Prince Charming.’