It was cool to look up David Burtka’s Wikipedia page and see that the photo on it was taken by ME.

I snapped it at the 2009 Emmys when I had a roaming red carpet pass and wandered around taking pictures. David could not have been nicer as we chatted awhile while his partner, Neil Patrick Harris, did TV interviews.

The 34-year-old David told me that day that he was in school studying to be a chef. Since then, He graduated from the Le Cordon Bleu College of Culinary Arts Pasadena in summer 2009 and is currently running a catering company called Gourmet M.D. in Los Angeles.

But hopefully David will still do some acting. He made his Broadway debut was as Tulsa in the 2003 production of Gypsy starring Bernadette Peters. He played The Boy in the American premiere of Edward Albee’s The Play About the Baby, for which he won the 2001 Clarence Derwent Award for most promising male performer.

In 2004, David originated the role of Matt in the musical The Opposite of Sex, and reprised the role in the work’s East Coast premiere in the summer of 2006.

He made his television debut in 2002 with a guest role on The West Wing; this was followed by guest appearances on Crossing Jordan. In How I Met Your Mother, the actor, David has made several appearances as  “Scooter” (whose actual first name is Bill), the former high school boyfriend of Alyson Hannigan’s character of Lily.

David, who has two children from a previous relationship, and Neil have been together since 2004. 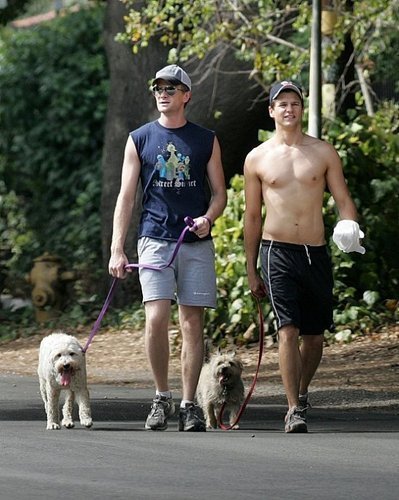