For a long time, it seemed like Molly Ringwald was frozen in time in all those wonderful John Hughes movies she starred in in the 80s.

She left an indelible impression in Sixteen Candles, The Breakfast Club and Pretty In  Pink, among other films (She was also so very good in the wrenching 1985 TV movie Surviving about teen suicide).

Molly’s never stopped working in movies (Betsy’ Wedding), television (Townies) and on the Broadway stage (Cabaret, Learning to Drive). But it’s only since she took the role of a mother of a pregnant teen in the ABC Family series, The Secret Life of the American Teenager, that Molly has returned to the spotlight in a big way.

Her show is in its third season, she has a new self-help book out called Getting the Pretty Back, and Molly also reunited with several of her co-stars from the Hughes films for a tribute to their late director at this year’s Academy Awards.

Molly had a nice chat with Brandon Voss for The Advocate and I’ve got a portion of it here:

Tell me about the humorous “Vote No on Prop. 8” video that you and your husband filmed in 2008.
My friend Matt knew somebody that was doing it and wanted me to be a part of it, so of course I said I would. It was important to me to do because it seems absolutely crazy that people who love each other can’t marry. It’s unfair the way the whole Prop. 8 thing went down — the act of voting no on something instead of yes was confusing, and it felt like a train wreck from the very beginning. Right now it’s frustrating, but years from now it’s going to seem crazy, like, “Oh, my God, we had slavery? We thought it was OK to enslave people?” Matt and Greg, the godparents of my children, have a relationship and a marriage that most people could only aspire to have.

Have you always been conscious of your gay fan base?
Since most my friends are gay, it would be hard not to be aware of it now, but I don’t think I realized it early on in my career because I don’t know that I definitely had that fan base until later. I became pretty aware of it in the ’90s, after some time had passed, and especially when I was living in New York and doing a lot of theater. I feel like the gay community might’ve identified with the general outcast characters in your John Hughes films, but why do you think there was no gay representation?
Maybe it was just too soon and too controversial at the time, but from what I understand, John was a big Republican. I really didn’t know this back then, and maybe he wasn’t when I was working with him, but I guess he became one. Not to say that all Republicans are antigay, but historically, you know, that has to rub off a little bit, right?

Though there were no gay characters, homosexuality was addressed in those early films through the frequent use of the word “fag.” Your character, Samantha, called Anthony Michael Hall’s Geek a “fag” in Sixteen Candles. “You die, fag” is scrawled on Bender’s locker in The Breakfast Club. And though it’s never spelled out, some of those outcast characters I mentioned — Duckie in Pretty in Pink, Brian in The Breakfast Club — almost seem like gay characters, in a way.
Yeah, completely! I totally know what you mean, and if those films were done today, those characters probably would’ve been gay. But sometimes I wonder if John was even aware of that. I don’t know that he was. What made those movies so interesting and so hard for people to replicate is that for some reason John was still somehow emotionally in the mind-set of those teenagers. Usually you can hear when an adult clearly wrote something for a kid character, but John’s movies don’t sound like that because he was still emotionally in that place. So you know how some kids can be gay and not know it? Or maybe they kind of know it but aren’t facing it? I feel like maybe John was writing those characters like that. 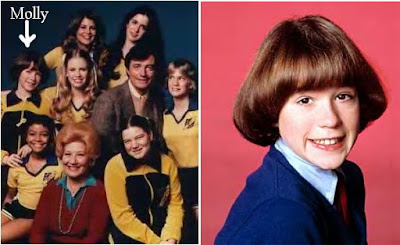 You were a regular on the first season of The Facts of Life. What do you remember about that infamous 1979 pilot episode, in which Blair insinuates that her tomboy classmate, Cindy, is a lesbian?
I remember nothing about that. Wow. Now that you say that, it sort of rings a bell, but I did not remember that at all.

Were you too young to understand the gay implications?
I knew what being gay was before I did Facts of Life because I did the West Coast production of Annie, which opened in San Francisco, and all the dressers were gay. I remember my mom talking to me about it. I was actually in San Francisco right when all that stuff was going on with Harvey Milk. I remember my mom talking to me about the Twinkie defense, and she told me the whole story of the murders, how it was a travesty, and how it never should’ve happened. We had conversations about what it meant to be gay, so I knew about that when I did Facts of Life, but for some reason I don’t remember that episode.

Your character was phased out at the very beginning of season 2, but surely you remember the sexual tension between Blair and Jo when Nancy McKeon joined the cast.
[Laughs] You know, Nancy McKeon sort of replaced me in a way. They were trimming down the cast to just four girls, and originally I was going to be one of those girls. But then they changed their mind, decided to go with Nancy McKeon, and booted me out.

To read the entire interview, go to Advocate.com.