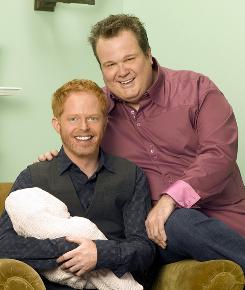 As the gay marriage debate continues to rage in the United States, two gay dads played by Jesse Tyler Ferguson and Eric Stonestreet on ABC’s hit comedy Modern Family could be doing a lot to change hearts and minds.

“I think once people watch the show, those are two characters who are very, very hard not to like and I think that has probably diffused any of the negative energy that people were feeling,” co-creator and executive producer Steven Levitan told me this week when we chatted before the start of the Hollywood Radio and Television Society luncheon.

Compared to the days when two men in bed on Thirtysomething caused threats of advertiser boycott 20 years ago, it’s amazing that there has been little or no controversy about a gay couple being part of this family comedy.

“We haven’t had much pushback on it,” Levitan said. “There’s always a fringe element that before the show came out, you know, ‘let’s boycott ABC,” and it was probably like 20 guys in a cellar someplace.

Mitchell Pritchett (Ferguson) and Cameron Tucker (Stonestreet) were introduced to audiences in the first episode bringing home their adopted baby.  Mitchell’s dad, Jay Pritchett, is played by Married With Children alum Ed O’Neill who sometimes still has his struggles with his son.

Said Levitan: “We have an episode that will air in January in which Jay is with a bunch of his buddies and he runs into Cameron and he introduces him as a friend of my son and Mitchell takes great offense at that. And through dealing with that issue, I think they come to a better understanding. It’s a very funny episode that’s really about something.”

Ferguson is an openly gay actor who previously played a straight character on the CBS comedy The Class while Stonestreet is straight and among his many roles was a recurring part on CSI: Crime Scene Investigation.

Levitan (pictured, left) said their on-screen chemistry was apparent immediately and elevates what is on the page: “They are beyond what we thought. We knew it was potentially a really great dynamic but there’s just something about chemistry that it works or it doesn’t and boy, it really works with them.”

He added: “I think [it works] because they are not who you would expect to be together and Cameron’s not what everybody thinks of as sort of a Will & Grace super-perfect, fit, trim GQ model. It’s nice to see a different coupling. And I think the talent of those two guys and the warmth they bring to it, really brings that part of the show to life.”