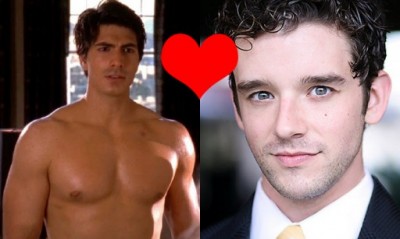 Ugly Betty alum Michael Urie returns to series television on September 24 with the premiere of Partners, a CBS comedy about childhood friends – one gay, one straight – who work together in an architecture firm.

Urie plays the gay man while David Krumholtz is the straight friend. Both have significant others who are a regular presence on the series and they are played by Brandon Routh and Sophia Bush, respectively.

Routh is best known for his turn as The Man of Steel in the 2006 film Superman Returns and Urie tells Entertainment Weekly he is happy to be playing his love interest.

‘He’s supercute and a bog ol’ tree trunk of a man,’ he says. ‘He plays the character’s aloofness perfect.y. He was so brilliant as Clark Kent, so this is basically a sitcom version of that.’

Urie, who is gay in real life, hopes the show will not only entertain, but also educate some people in a non-threatening way.

‘There are places in the country where straight people still don’t understand how to be friends with a gay man and I think if they catch out show, it can be what Will & Grace was for those types of folks,’ he says. ‘Where Ugly Betty and Glee were able to tackle serious social issues about coming out, this show is much further along in the character’s lives. We’re meeting them in midlife, so it’ll be less of an issue show and more of a lead-by-example show, I hope.’