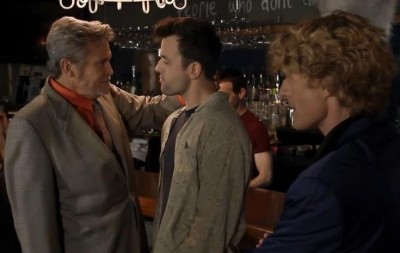 This week’s episode of the fun web series Old Dogs & New Tricks is called The Skinny Lady Sings – and she sure does!

I’m so happy to see gay actor/director/author/activist Michael Kearns guest starring as Bill Shannon, a man from Damian’s past, who sets the stage for conflict for Nathan and Damian (Leon Acord and Ryland Shelton)—and acts as a catalyst for next week’s season finale.

“I’m honored Mr. Kearns is on our show,” says creator/writer/actor Acord. “I’m an admirer of his work, and loved his book on solo shows when doing mine a few years back. We also shared a role in a play A Few Gay Men in the early 2000s – me in San Francisco, and Michael in LA. I’ve been dying to work with him.”

Also in this episode is my dream man, the handsome and sexy Ian Buchanan (who also has reappeared on General Hospital!).