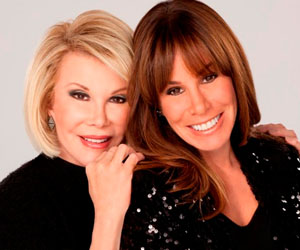 The only child of Joan Rivers is speaking out about her mother’s death last September which she believes was ’100% preventable.’

Melissa Rivers said on The Today Show earlier today that nothing was amiss the night before her 81-year-old mom went in for a minor throat procedure.

‘All she said was, “Ugh, I hate having to do this. Getting old sucks,”‘ the daughter recalled of their last telephone conversation.

But the comedy legend went into cardiac arrest during the procedure at Yorkville Endoscopy in Manhattan and died a week later.

‘In my opinion, it was 100 percent preventable,’ said Rivers who is suing the clinic. ‘How about paying attention to the vital signs? How about having a properly equipped crash cart?

‘The level of medical mismanagement, incompetency, disrespect, and outrageous behavior is shocking and frankly, almost incomprehensible.’

Rivers added: ‘Not only did my mother deserve better, every patient deserves better. It is my goal to make sure that this kind of horrific medical treatment never happens to anyone again.’

‘… No family should ever have to go through what my mother, [my son] Cooper and I have been through,’ she said.

The daughter is out promoting a memoir about her mom called The Book of Joan: Tales of Mirth, Mischief, and Manipulation.