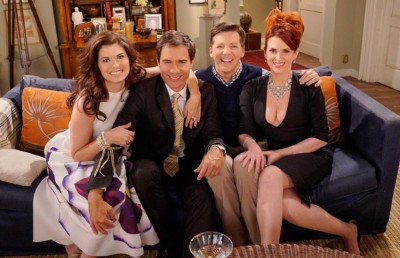 As the world saw this week, Megan Mullally stepped back into Karen Walker’s pumps and reunited with her Will & Grace pals.

The two-time Emmy winner is dishing about the glorious reunion and makes clear she was not wearing a push-up bra.

‘First of all, I wasn’t wearing a bra,’ she tells People.com.

‘And second of all, the whole thing felt like we’d just gone on hiatus for a week and we’d just come back. It was just like no time had passed. It was so effortless and fun. We just snapped right back into it, and we were just laughing and having a blast.’

Mullally, Debra Messing, Sean Hayes and Eric McCormack filmed a new scene of their classic 1998-06 NBC sitcom to encourage people to get out and vote in the upcoming US presidential election.

It also featured a cameo by Shelley Morrison who reprises her role as the long-suffering but ever-feisty maid Rosario.

‘It was unbelievable,’ Mullally says. ‘We went into the studio where we were going to shoot it, and there was the real set with every throw pillow and tchotchke just as it had been. We walked around and were flipping out. It’s hard to explain, but it’s kind of a contradictory process of being flipped out and excited but also feeling totally normal. It was as if we had just been there.’