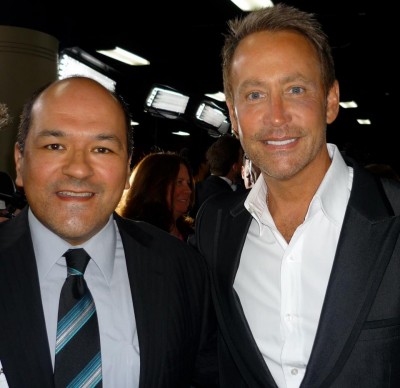 So many Morning Men, so little time.

Well, it seemed that way at least at last Saturday’s GLAAD Media Awards where I met three of my blog’s Morning Men alums for the first time.

The first was Peter Marc Jacobson who had been featured just last Friday.

He had sent me a nice message earlier in the day on Saturday saying thanks so it was cool to be able to meet face-to-face shortly after that.

‘I was so honored to be a Greg In Hollywood Morning Man,” Peter said when we met. ‘I tweeted it and I put it on my Facebook. It was a beautiful article.’

Peter, of course, is co-creator and co-producer of the TV Land sitcom Happily Divorced which stars his former wife Fran Drescher. It is based on their lives as a married couple who split up after the husband realizes he is gay.

He wondered if the extra attention would result in him getting a husband.

Somehow, I think the handsome Peter will have no trouble with that. 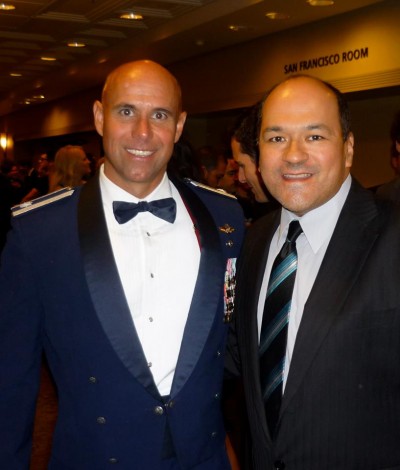 Speaking of handsome, it was such a thrill to run into Lt. Col. Victor Fehrenbach as he waited in line at the bar outside the ballroom.

When I introduced myself, he realized he had been featured on the blog as a Morning Man on Veteran’s Day.

‘Thank you so much!’ he said. ‘Some friends sent it to me and I was very honored.’

He also told me that he had officially retired from the military with full benefits and pension on Sept. 30. He had been threatened with discharge, because he is gay, after 18 years in the military and just two years short of retirement.

No way to treat and American Hero completed 88 combat missions, 2,189 total flying hours, 1,487 fighter hours and 488 combat hours. He has received eight air medals, one for Heroism, and was hand-picked to protect the Washington, D.C. airspace after 9/11. He flew combat missions in Iraq and Afghanistan, targeting the Taliban and Al Qaeda. 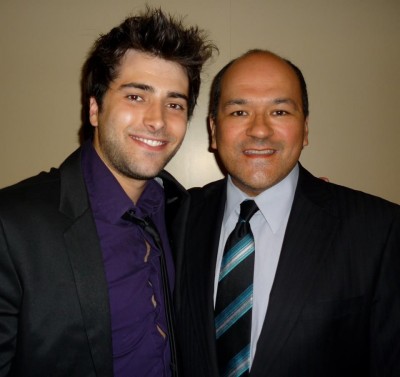 And finally there was Days of Our Lives cutie pie Freddie Smith who was featured as a Morning Man last spring when he was appearing on 90210 as Teddy’s new boyfriend.

I bumped into Freddie just a few minutes after seeing Fehrenbach so realized I was hanging out in the perfect place before the start of the show – the bar!

Freddie could not have been nicer. Although I’ve interviewed his Days co-star Chandler Massey several times, I’ve never interviewed Freddie. We didn’t have time to do more than have a brief off-the-record chat and snap a photo together. I did get him to tell me that even though his character of Sonny has been largely absent on screen lately, Freddie has been busy taping a bunch of episodes so the character will be resurfacing down the road which is good news for fans.