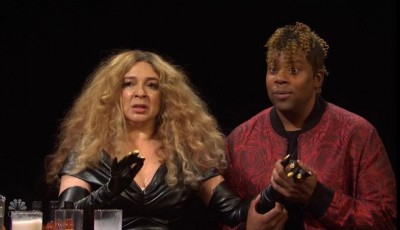 Excuse me, I’m still composing myself after some uncontrollable laughing fits.

Did you SEE Maya Rudolph as Beyoncé on SNL over the weekend?

The sketch has Beyoncé having a hard time being interviewed by Sean Evans (played by Mikey Day) on his Hot Wings interview show after eating an extremely hot wing.

“I still can’t tell if this is beneath me, but my sister Solange loves this show, so I said I’d do it,” said Rudolph as Beyoncé.

She is dressed in a recreation of the star’s leather Grammys look including the wig which, in the sketch, needs a few ice cubes!

It was a strong episode overall and it was such a treat to have Rudolph, a two-time Emmy winner, being featured as characters other than VP Kamala Harris which has been the reason for her frequent returns in recent seasons.