Totally Random Video: When David Fisher came out to everyone on HBO’s “Sex Feet Under”

Matt Damon on “Behind the Candelabra” to air on HBO: “It’s really rare to even see a script this good” 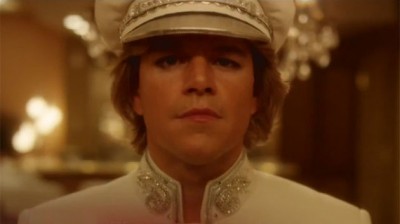 So I spent the day in Pasadena at the TV Critics Association’s annual winter press tour. One of the networks doing presentations was HBO and one of their upcoming movies is Behind the Candelabra.

I was sitting up near the front and they began to play scenes from the movie and I spotted Michael Douglas and Matt Damon quietly enter the ballroom then stand there watching along with the rest of us.

I’d look up at the screen, see Michael and Matt up there as Liberace and his much-younger lover Scott Thorson, then look back down at the real-life Douglas and Damon. This was especially surreal when a scene came on in which Matt emerged from a swimming pool wearing a speedo, walks over to Michael who is on lying poolside and straddles him – then he kisses him. 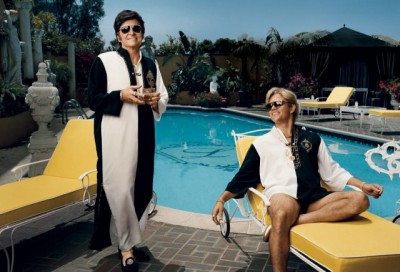 Damon didn’t flinch while watching the scene and I was so impressed later on during the panel (with Douglas, director Steven Soderbergh and producer Jerry Weinteraub) with how he handled a question from a journalist who asked if he considered the film to be a comedy.

The actor said a quick and definitive ‘No.’

‘Look, there were aspects of their relationship that were absurd,’ he said. ‘But to me, it just pointed our that there are aspects of all of our lives that are absurd but it’s not absurd to us because they’re our lives.’

Damon made clear that he believes the film is a drama that should be taken seriously. It is based on the Thorson’s book of the same name which recounts his tempestuous six-year romantic relationship with Liberace which ended bitterly. Thorson sued the entertainer for ‘palimony’ which was settled out of court the year before Liberace died from AIDS in 1987. 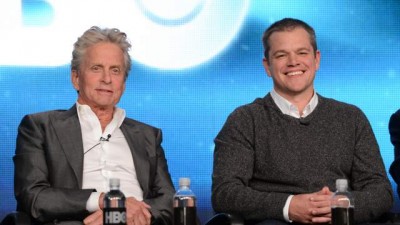 ‘It’s really rare to even see a script this good. It was so complex,’ Damon said. ‘Their relationship, (screenwriter) Richard LaGravense so got. This dynamic. Whether it was the actual dynamic or not I completely believed what he’d written. What it felt like was if this was a relationship between a man and a woman, you’d feel at moments like, ‘This is too intimate, maybe I shouldn’t be here.’ But it’s between a man and a man and I’ve never seen that in a movie before.’

Despite the differences in their ages, Damon did not believe the younger man was using Liberace.

‘I think his love was genuine but I think it was complicated,’ he said. ‘He was somebody who was a foster kid and was looking for a family and (Liberace) gave that to him. They had profound love for each other and it ended badly but there were a lot of wonderful moments and a lot of ups and downs – a lot of things that everybody goes through in long-term relationships.’

The part called for flashy costumes and big hair, but Damon says he and Douglas ‘took it very seriously.’

‘These were people’s lives and we wanted to get it right,’ he said. ‘We just worked really hard on it and we were extremely happy to do it because we know how rare something like this is.’

Totally Random Video: When David Fisher came out to everyone on HBO’s “Sex Feet Under”