Margaret Cho busts Greg In Hollywood from the stage during comedy night at Revolver! 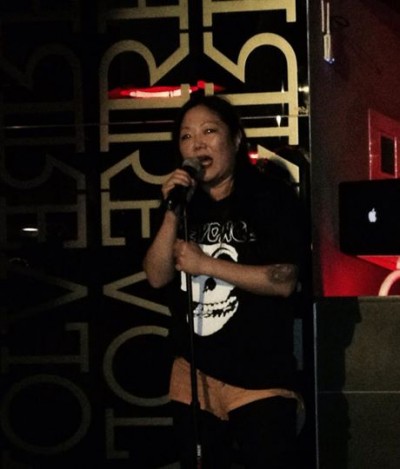 Got a tip that Margaret Cho was going to be performing last night at Revolver Video Bar in West Hollywood as part of the weekly Drunk On Stage comedy night.

I knew that Wanda Sykes and Roseanne had appeared a few weeks ago and was sad to have missed it.

Was not going to miss Margaret and even got there about 45 minutes early to snag a prime second row seat up close.

Too close it turned out.

During her routine, Margaret was talking about Ireland Baldwin’s vagina and it was so funny and outrageous that I decided to share the moment on Facebook.

Just as I was  posting this photo Margaret called me out for texting during her performance!

I think I tried to explain what I was doing but then Margaret realized it was me. (I’ve done some red carpet interviews with her and we’ve interacted on Facebook and Twitter.)

“That’s Greg! Greg Hernandez is my friend!” she assured the crowd. “Don’t be mean to him.”

I was cracking up and trying to hide behind my friend, photographer Jon Viscott.

I didn’t get to chat with her after her set because she ducked out a side door as another comic began to perform. But we did exchange Facebook comments:

FILE UNDER: About Greg In Hollywood, West Hollywood