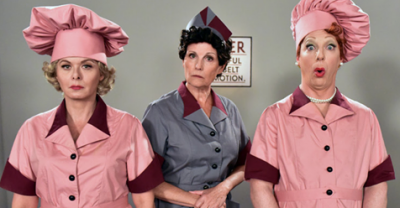 I haven’t written very much about it yet but boy, I am so excited about tomorrow night’s episode of Will & Grace which is a tribute to I Love Lucy.

The episode was done with the full support of Lucie Arnaz, the talented daughter of the show’s stars Lucille Ball and Desi Arnaz.

Miss Arnaz, who won an Emmy for an NBC special (Lucy and Desi: A Home Movie) she produced about her parents and the show, has a cameo in the episode as the mean boss lady in the chocolate factory when Lucy and Ethel (Vivian Vance) get jobs. The lady who says: “Speeeeeeeeed it up a little!”

Lucie spoke with Gold Derby about how the episode came to be and much more.

Here is a LINK.