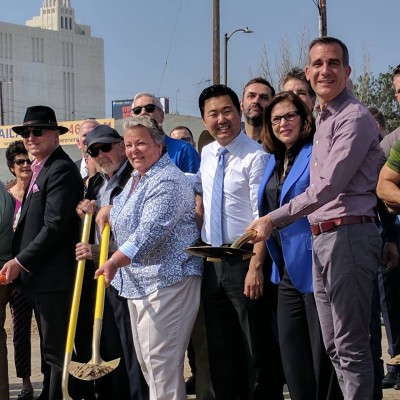 They do so much wonderful work and never has their commitment to the needs of the LGBT community both young and old and everyone in between been more critical.

Earlier today, Center CEO Lorri L. Jean and Los Angeles Mayor Eric Garcetti were among those on hand for the official groundbreaking ceremony for The Center’s Anita May Rosenstein Campus.

This first-of-its-kind complex in Hollywood will offer comprehensive multi-generational services and housing.

It will include 135 units of affordable housing for seniors and youth, 100 beds for homeless youth, new youth and senior centers, and much more. 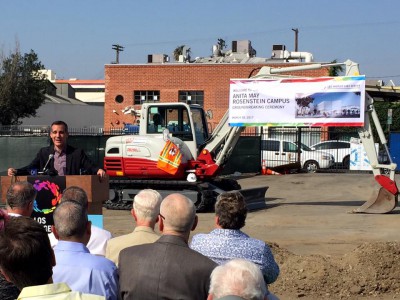 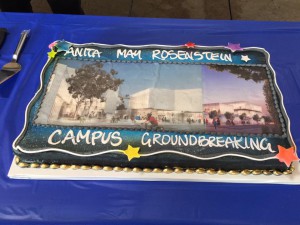 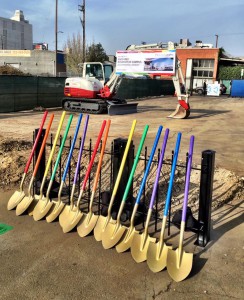 The Center will be able to expand its health and mental health services at its nearby McDonald/Wright Building by relocating staff and programs currently there t=to the new campus.

The complex will span more than a city block and its campus will connect with the Center’s arts, cultural and educational facility – The Village at Ed Gould Plaza – which is located directly across the street.

It’s not cheap to build all of this but a record $35 million toward the $40 million goal has been pledged so far.

This includes $7 million – the largest gift by a living person to an LGBT organization – from philanthropist Anita May Rosenstein.

The Center has secured federal New Markets Tax Credit financing that will result in over $9 million of subsidy for the campus. Click HERE to see images of what the campus will look like.

‘Nearly a decade ago, we began to dream of a project unlike any other: a beautiful multi-generational campus with new and expanded social services, together with affordable housing for seniors and youth,’ CEO Jean said at the groundbreaking.

‘More than that, we dreamed of uniting it with The Village at Ed Gould Plaza, our arts, cultural and educational facility. Combined, the two locations will offer more integrated services for LGBT people than any other place in the world.

‘ I’m enormously grateful to the many donors, community and elected leaders, and financing partners who are making the dream a reality.’