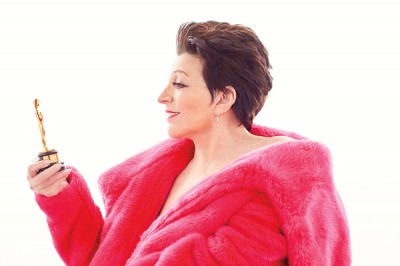 Liza Minnelli is on the cover of Variety magazine’s Oscars issue which makes me happy because, like her mother Judy Garland, Liza is a star for all time.

She talks a bit about her mom in the interview as well as some of her major award wins:

You were 19 when you became the youngest person to win a Tony for your Broadway debut, “Flora the Red Menace.” How did your life change after that?
The best part about winning an award is the night you win it. And then you have to go back to work. I believe that.

How did movies come along?
I read the book “The Sterile Cuckoo,” and I said to my father, “Daddy, if they ever make anything out of this, I want to play the girl Pookie Adams.” Then the director Alan Pakula announced he was making it. My dad knew him really well. He would come over to the house all the time. What I remember is Daddy saying to him, “Liza wants to play Pookie Adams.” I said I’ll audition. And I did.

Take me back to Oscar night. You’re in a yellow Halston dress.
It was like a T-shirt collar to the ground, straight down, and a sweater made of crepe, same as the dress. My father’s favorite color was yellow. I wore that and jewelry that Halston had picked for me for that night. I said to my dad, “Do I look all right?” He said, “You look perfect because you’re not overdressed and you’re not underdressed.”

Did you think you were going to win? The other nominees were Cicely Tyson [“Sounder”], Diana Ross [“Lady Sings the Blues”], Maggie Smith [“Travels With My Aunt”] and Liv Ullmann [“The Emigrants”].
I didn’t think I was going to win. I hadn’t planned [an acceptance speech]. If you plan something and then it doesn’t happen, then you’re disappointed. I asked my dad, “What should I say if I win?” And he said, “You’ll know what to say.” I said, “OK,” and off we went. When [Gene Hackman, who was presenting with Raquel Welch] said my name, my father screamed and he gave me tinnitus. I had tinnitus because of the way my father screamed at the Oscars, honestly.