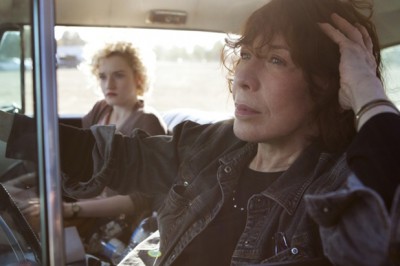 It feels like I’m on an episode of Oprah’s Favorite Things or something.

The event is the Los Angeles Film Festival, the star is Lily Tomlin and the film is Grandma.

Film Independent, which puts on the festival, made the announcement this morning.

Tomlin’s performance is “unapologetic, hysterical, moving — it’s the kind of performance that stays with you, gets inside you, makes you feel compelled to love harder,” said LAFF director Stephanie Allain in a statement.

Grandma was well-received at the Sundance Film Festival and picked up for distribution by Sony Pictures Classics.

The last time Lily had a starring role in a film (Big Business), the Berlin Wall was still standing and Ronald Reagan was president of the US!

She plays a feminist poet who is breaking up with her far younger girlfriend and still dealing with the death of her longtime partner. The poet’s granddaughter shows up needing money for an abortion and Lily’s character takes her around LA trying to get the money for it.

‘I know I’m putting myself on the line, kind of,’ Lily told the Los Angeles Times in January. ‘But I trusted (writer-director by Paul Weitz) and I liked the material. First of all, he had written it with me in mind, and he wanted me. Then as we worked through the material, it just seemed like a good thing to do.’

Film Independent also announced today that director Rodrigo Garcia (Mother and Child, Albert Nobbs)  will serve as this year’s guest artistic director, and producer Gale Anne Hurd (The Terminator, The Walking Dead) will receive the Glory to the Filmmaker Award.

The nine-day festival will take place from June 10 through June 18 in downtown Los Angeles, largely at the Regal Cinemas in the LA Live complex.

Passes for this year’s LAFF will go on sale on April 21, with the lineup announced on May 5 and individual tickets on sale on May 19.