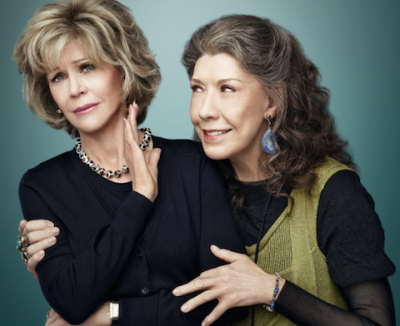 It’s been 35 years since Lily Tomlin and Jane Fonda teamed with Dolly Parton to play secretaries getting sweet revenge on their boss in the classic comedy 9 to 5.

Now Tomlin and Fonda, who have remained thick as thieves over the years, are back together on screen again in the Netflix comedy series Grace and Frankie which premieres on May 8.

‘It’s so nifty being back together as old broads, even though it seems like only two months ago that we made 9 to 5,’ Tomlin tells TV Guide. ‘It’s so right it seems preordained.’

But neither of the ladies think it’s a show that could have been done even five years ago. They play women who do not like each other but have been forced to tolerate each other because their husbands are law partners.

Then, a bombshell: The husbands, played by Martin Sheen and Sam Waterston, reveal that they are in love with each other and want to get married.

‘Now, two men can marry. But before, they might have stayed covert and wives like Grace and Frankie could have gone to their graves not terribly fulfilled,’ Tomlin says.

‘Grace and Frankie aren’t just dealing with being left behind by their men, they’re dealing with not being seen or heard in a world that’s all about youth.

‘They start out really disliking each other and end up being each others life preserver. We’re having such a grand time with these characters that I’ll have to sign on for a second season just to see what happens to them!’

Tomlin, 75, is two years younger than Fonda and says of aging: ‘I’m doing my best to skip through my golden years. Of course in your private moments, you try to come to terms with the physical stuff.’