Could there have been a show on TV this week that was as gay as the Emmys? I think not! Welcome back to Girl Talk, Greg in Hollywood’s weekly detour into Lesbian Land. This week, it’s all about the 62nd Primetime Emmy Awards, which I was lucky enough to get paid to attend.

I haven’t really been a big Bruce Springsteen fan since Born in the USA, but I’d be lying if I said I didn’t rush home and download Born to Run. What a great opening, and even back in the pressroom, there wasn’t a frowning face in the lot.

Speaking of the pressroom, most of the night’s winners came back to take questions, but two big names were strangely absent: Ryan Murphy, who took home the statuette for writing the Glee pilot; and Lynch, who collected the trophy for supporting actress in a comedy. 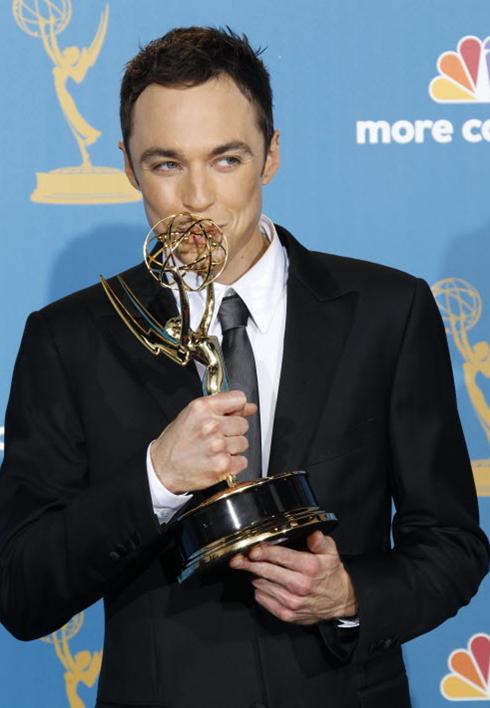 It was beyond disappointing, but the mood quickly changed when Jim Parsons ventured back to meet the media and shared how he planned to celebrate: “I am the lamest old man! I’m tired, but I think this gives me enough energy to stay up to 10:30 or 11,” he joked. “I could rock out with some ice cream!” CBS’

The Big Bang Theory remains one of my favorite 30 minutes of TV on the air and I just want to hug and cuddle Parsons, especially when he channeled his character, physicist Sheldon Cooper, when he admitted his love for almanacs and his excitement over being among the list of Emmy nominees — and now winners.

“It feels like being a small part of history,” he said. “I’m a big reader of almanacs and lists — boy, do I sound OCD, but I was oddly thrilled to be part of a list and group like this. The winning is the cherry on top.”

Another of the night’s big winners was Modern Family’s Eric Stonestreet — capturing the Emmy for supporting actor in a comedy — who said his goal for playing Cameron was to make him universal.

“I just wanted someone somewhere to say, ‘Well, I’d sit down and have a beer with that guy. I don’t care what his sexuality is.’ We just wanted to open people’s minds and hearts.”

Could he be more adorable? Yes, actually. When he confirmed that the show’s writers will deliver the upcoming kiss between Cameron and Mitchell “in a really sweet, great way that’s consistent with what our show is.”

How much longer until Season 2 starts?

In perhaps the biggest upset of the night, The Good Wife’s Archie Panjabi touched on Kalinda’s sexuality after winning for supporting actress in a drama. With the door literally left open just enough to whet viewers’ appetites on a very possible lesbian story line, Panjabi said she’s just as unclear as everyone else.

“Normally I get to know my characters extremely well,” she said. “Kalinda doesn’t seem to open up to me, either. So I’m as taken back by her mystery as the audience is and her sexuality is one thing I still haven’t figured out. When she does confess to me I will certainly reveal it.”

spite the vagueness of her remarks, one thing is certain: I’m absolutely watching The Good Wife’s second season now that I get what the fuss has been over Panjabi — her eloquent responses backstage and stunning presence were beyond captivating.

And yes, I’m truly saving the best for last here. While listening to winners ranging from Al Pacino (You Don’t Know Jack) to Tom Hanks (The Pacific) was exciting, nothing — not even getting a high-five from Friday Night Lights’ Coach Taylor (Kyle Chandler), which totally happened on Saturday night! — and I mean nothing could come close to listening to Emmy’s Bob Hope Humanitarian award recipient George Clooney speak on marriage equality. Live. In the same room. Maybe 15 feet from where I was working. In person. Live. Thisclose. And Clooney — whom I loved on The Facts of Life, Roseanne and ER — said all the right things: “These are the kinds of things that take a long, long time to change … People will look back at this time in our history and think of it as an archaic time. I feel like it’s a slow-rolling process, but it will happen eventually.” Oh, George. I’d totally add you to my hug and cuddle list now — but you’re still second on the list, behind Parsons!