LeAnn Rimes to appear at The Abbey 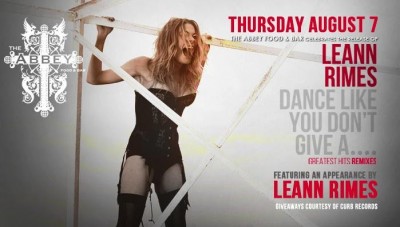 LeAnn Rimes is appearing at The Abbey in West Hollywood tomorrow night to promote something she happens to be really good at: music.

I haven’t watched her reality show with hubby Eddie Cibrian because, quite frankly, I had trouble even watching interviews of them promoting the thing!

For the past five years, LeAnn’s music career has been overshadowed tabloid coverage of her affair then marriage to Cibrian and her sometimes very public feud with Cibrian’s ex-wife, Brandi Glanville, of Real Housewives of Beverly Hills fame.

But LeAnn has been supportive of LGBT equality and in 2010 performed The Rose with The Gay Men’s Chorus of Los Angeles in remembrance of the gay teenagers who committed suicide that year.