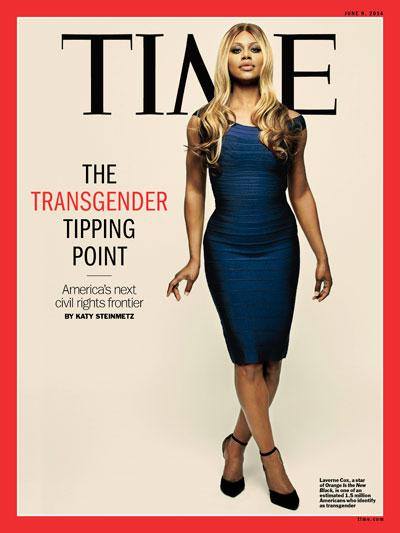 When Farrah Fawcett made the cover of Time magazine back in 1976, she considered it one of the great accomplishments of her life.

I’m not so sure a Time cover still carries with it that kind of lofty status but I’d think it was still mighty cool.

So it’s terrific to see trans actress Laverne Cox of Orange is the New Black fame on the cover looking glorious with the headline: The Transgender Tipping Point.

The story examines the radical rise in awareness of transgender Americans and how this movement is reshaping our definitions of gender. Of the estimated 1.5 million trans people in the U.S., nearly one in four say they have lost a job because of their gender status; trans activists are now pushing for new policies in schools, hospitals, workplaces and the military.

Time traces this cultural sea change, telling the stories of trans people across America, including Cox, a Google software-engineer, a former National Guardsman and a 17 year-old trans girl who made history as homecoming queen.

Cox tells Time: “We are in a place now where more and more trans people want to come forward and say, ‘This is who I am.’ And more trans people are willing to tell their stories. More of us are living visibly and pursuing our dreams visibly, so people can say, ‘Oh yeah, I know someone who is trans.’ When people have points of reference that are humanizing, that demystifies difference.”

Here is more of the interview:

Janet Mock [who wrote a best-selling memoir called Redefining Realness] has said that what’s happening in this moment is that trans people are taking more control over their narrative. Would you agree?

Absolutely. We have to listen to people. Folks want to believe that genitals and biology are like destiny! All these designations are based on a penis, however many inches that is, and then a vagina. And that’s supposed to say all these different things about who people are. When you think about it, it’s kind of ridiculous. People need to be willing to let go of what they think they know about what it means to be a man and what it means to be a woman. Because that doesn’t necessarily mean anything inherently. Folks are just really uncomfortable with that sense of uncertainty, or that shift.

Why do you think that makes people so uncomfortable?

We live in an uncertain world and we want to believe that what a man is and what a woman is–I know that. And people don’t want to critically interrogate the world around them. Whenever I’m afraid of something or I’m threatened by something, it’s because it brings up some sort of insecurity in me. I think the reality is that most of us are insecure about our gender. They think, ‘Okay, if there’s this trans person over here, then what does that make me?’ We want to just coast along in a belief system that makes us feel secure, because we are a culture, as Brene Brown would say, that is intolerant to vulnerability. And if we are in a position where we have to begin to question this very basic idea of ‘A man has a penis and a woman has a vagina,’ then that’s a lot of vulnerability.

Go to Time.com to see the entire interview and to see some video of Laverne.