WATCH: Billy Porter on being part of Time 100 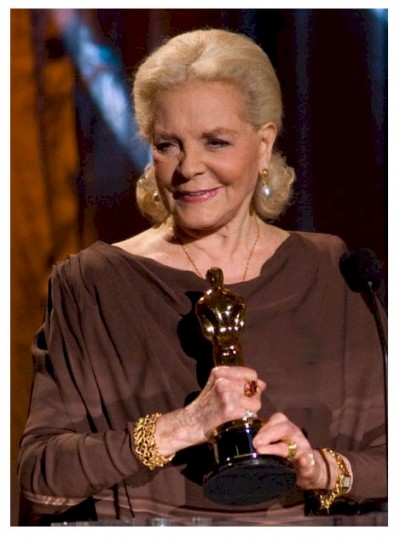 The great star Lauren Bacall died on this day six years ago just shy of what would have been her 90th birthday.

To remember this unforgettable film and Broadway legend, we look back on one of the great nights of her career in 2009. Twelve years after she shockingly lost the supporting actress Oscar to Juliet Binoche, Bacall was at last presented with an Academy Award.

Bacall had received her only one Oscar nod in her nearly 70 years of making movies, for The Mirror Has Two Faces, but she had a stellar movie career that began working for Howard Hawks in 1944′s To Have and Have Not. She went on to star in such memorable films as The Big Sleep, Key Largo, Dark Passage, Written in the Wind, Blood Alley, How to Marry a Millionaire, Woman’s World, Young Man With a Horn, Designing Woman, Murder on the Orient Express, and The Shootist, among many others. In later years her films included working for Lars Van Trier in the films Dogville and Manderlay and opposite Nicole Kidman in Birth.

Angelica Huston presented the Oscar which was fitting since Bacall was on location in Africa for the filming of The African Queen when her father, John Huston , received word of Angelica’s birth.

Bacall’s speech here seems off the cuff and for that reason, she forgot to mention her son Sam Robards whose father was the great actor Jason Robards. She later said in an interview that it pained her to even look at the award after that because she had not mentioned her younger son (she had a son and daughter with Humphrey Bogart).

Hopefully she eventually forgave herself and was able to enjoy the well-deserved prize.

WATCH: Billy Porter on being part of Time 100