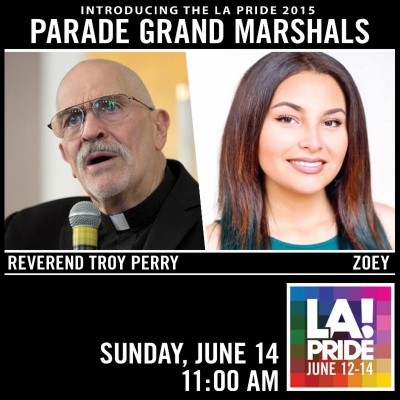 One of the highlights was getting to meet the lovely Zoey who will be one of the two grand marshals in Sunday’s parade.

At the age of 13, Zoey has already made a name for herself as a millennial who is determined to not only change people’s perceptions and attitudes towards trans people, she is working to change legislation.

At the age of 11, Zoey, her mother and ACLU fought for her right to self-identify in school.

Joining Zoey as grand marshal is the Reverend Troy Perry.

In 1970, a year after the modern transgender, lesbian, gay, and bisexual liberation movement was launched by the rebellion at the Stonewall Inn on New York’s Christopher Street, activists around the country were thinking of ways to mark the anniversary. Los Angeles TLGB community leaders, Reverend Perry, Reverend Bob Humphries and Morris Kight stepped up and created the world’s first permitted Pride Parade.

The only remaining survivor of the three, Rev. Perry has dedicated his life to fighting inequalities with his faith-based approach of all-inclusive journey to discover a loving and caring God.

As part of his mission, he founded Los Angeles’ predominantly gay Metropolitan Community Church and was also the first openly gay person to serve on the Los Angeles County Commission on Human Relations and has been honored by many community organizations for his tireless work.

“I am so deeply honored to be named community Grand Marshal alongside Zoey at this year’s 45th Christopher Street West LA PRIDE parade! As the last surviving founder of CSW, it is with great pride that I share this honor with a representative of tomorrow’s leaders in fighting for equality. One who truly embodies the future of our struggle and represents the ideals of what our community has to offer,” said Reverend Perry. 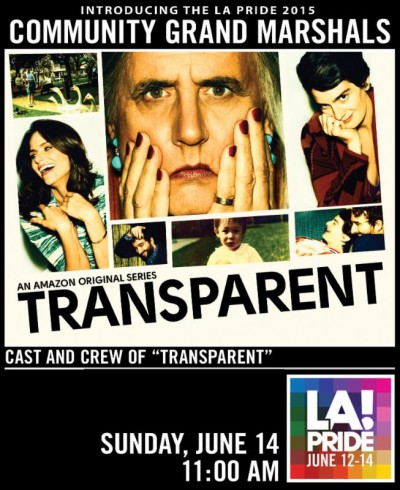 Transparent focuses on a dysfunctional family learning about their father’s secret, he identifies as female and her secret gets out.

With the largest number of trans employees to have worked on any production, Transparent supports the community bringing attention and real-life struggles through its dynamic storytelling as well as its efforts in vocally championing equalities for the trans community.

“We are humbled to be honored as the Community Grand Marshal for LA PRIDE and thrilled to celebrate the forward progress of the transgender movement. We are inspired by the courage shown by the community to live authentically and feel fortunate to be able to share their stories,” said Transparent’s Jeffrey Tambor.

The parade begins at 11 am on Sunday along Santa Monica Boulevard starting at Crescent Heights.