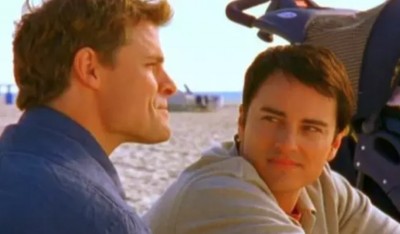 Oh, how I loved Jack McPhee.

Dawson’s Creek’s gay character had me at hello all those years ago and much of it had to do with the portrayal of the character by actor Kerr Smith.

Smith now has a role as a high school principal on The CW’s Riverdale and talked to Too Fab.com about that and about Dawson’s Creek.

While nearly every show has at least one gay character now — including Riverdale’s own Kevin (Casey Cott) — that wasn’t always the case. When Jack came out in a two-part episode back 1998, it made headlines. When the character had his first passionate kiss with another man — a primetime TV first, too — it was a thing. To Smith, it only shows how far TV has come in terms of representation.

“We were the first ones to do that. It was a crazy experience back then and you’re right, look at every single show now, it’s pretty amazing,” he said. “There’s always a gay storyline, a lesbian storyline or whatever. I was talking to Casey and he’s playing pretty much the same character I played on Dawson’s.”

Smith said he felt a “huge” responsibility at the time to get the role right and recalled the conversation he had with series creator Kevin Williamson when he learned what was in store for the character.

“I remember the day Kevin Williamson came down to Wilmington, North Carolina … He said, ‘Kerr, let’s go get some coffee,”” said Smith. “I went, ‘Oh no, am I fired?’ And he throws this idea, ‘We want to go down a different avenue with Jack,’ and I go, ‘What does that mean?’”

“Obviously, he always had the intention of making one of his characters gay, he was still in the closet at that point too and every character in ‘Dawson’s Creek’ is an extension of Kevin Williamson,” Smith continued. “My storyline ended up being largely Greg Berlanti’s. It was an intense experience and I remember calling everybody I respected and said, ‘Hey should I do this?’ Doing the first male-male kiss, I remember it was intense. I’m glad we did it and it was part of history.”