Katy Perry shares at HRC dinner that she’s more than kissed a girl: ‘I was curious’ 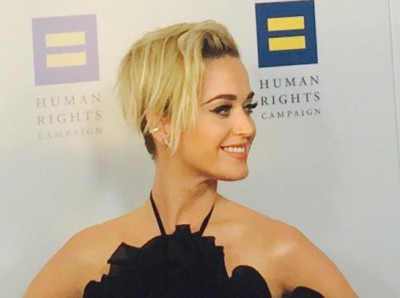 Turns out there’s more to Katy Perry’s hit 2008 I Kissed A Girl.

‘Truth be told, I did more than that,’ Perry said last night at the Human Rights Campaign’s gala dinner in Los Angeles.

While accepting HRC’s National Equality Award Perry told the crowd: ‘I’m just a singer-songwriter honestly. I speak my truth and I paint my fantasies into these little bite-sized pop songs.

‘In 2008 when that song came out I knew that I started a conversation that a lot of the world has been curious enough to sing along to.’

As for her own curiosity and experimentation the younger Perry had wondered: ‘How was I going to reconcile that with a gospel-singing girl raised in youth groups that were pro conversion camps?

‘What I did know was that I was curious and even then I knew sexuality wasn’t as black and white as this dress.’