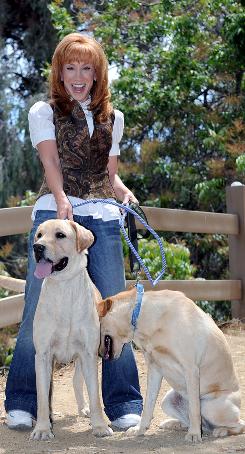 I love when Kathy Griffin has something to promote because this girl knows how to flog the heck out of her projects!

Whether it’s a Grammy-nominated album (For Your Consideration and Suckin’ It For the Holidays) best selling book (Official Book Club Selection: A Memoir According to Kathy Griffin), or one of her many TV appearances, Kathy will chat up every major talk show host who will book her and do lots of interviews.

She may be a major star, but she still works as if she’s forever on the D-List.

Tonight, the stand-up special Kathy Griffin Does the Bible Belt premieres on Bravo (as part of a night-long block of Kathy’s previous specials). The red-headed dynamo – a two-time Emmy winner for Kathy Griffin: My Life on the D-List – is the subject of today’s cover story of the USA Today Life section.

On the tough times: “I thought I had made it, but I went from Suddenly Susan to suddenly cold” when the series folded in 2000. … “I was back in career limbo, too well known for auditioning with total unknowns, not famous or successful enough to be part of a series.”

The breakthrough: By 2004, Griffin had earned a certain notoriety, but not enough to warrant VIP treatment or return calls from talent agents. “It dawned on me that that’s the TV show. I’m so D-list I couldn’t even get my agents to the pitch meetings to sell a show about how I was on the D-list.” TBS and VH1 passed on her pitch. Bravo greenlighted six episodes. “Bidding war? No one else wanted it,” Griffin says.

On playing huge venues: “D-List really changed everything. For me, it was always a big deal performing in front of 500 people. Now it’s up to 5,000 four nights at Madison Square Garden’s theater. And you really get the best audiences. They’re not coming to heckle you. They’re coming to see the thing they see on Bravo.”