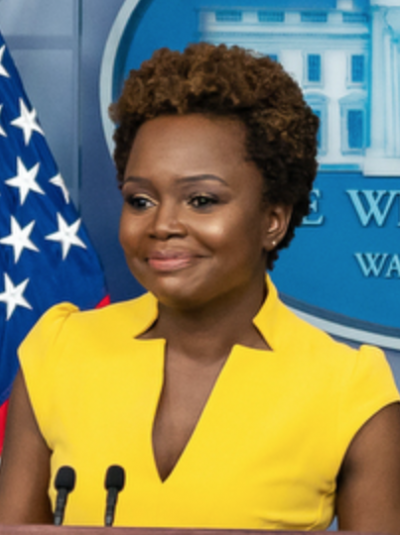 As Deputy Press Secretary, Jean-Pierre was the first out LGBTQ woman, and second Black woman, to lead a White House briefing in May 2021. In October 2021, Jean-Pierre led the White House in participating in GLAAD’s Spirit Day, and spoke during the White House press briefing about Spirit Day’s power of visibility for LGBTQ youth: “I could only hope that young people who might be watching or see clips of this briefing will know that they are supported and represented in the highest levels of government today.” Video here.

Last month, Jean-Pierre spoke out against anti-LGBTQ legislation in states across the country. Earlier this year she denounced memos from Texas Governor Abbott and Attorney General Paxton falsely and harmfully targeting families of transgender youth: “No parent should face the agony of a politician standing in the way of accessing life-saving care for their child.”

Jean-Pierre has an accomplished background as a communications leader, from work in the Obama White House to presidential campaigns and local politics. She has also served as Chief Public Affairs Officer for MoveOn.org and as an NBC and MSNBC Political Analyst. Jean-Pierre authored the political memoir Moving Forward: A Story of Hope, Hard Work, and the Promise of America.

GLAAD President and CEO Sarah Kate Ellis said on Twitter: “Karine Jean-Pierre is a brilliant communicator and person of tremendous intelligence, humor and poise, skills that will serve her and our country well in her new role. There are few jobs more visible or more important to our democracy than to share information with the White House press corps and answer their questions. To have an out queer person of color speak for the President of the United States says everything about Karine’s talent and heart, and recognizes that LGBTQ people can belong, contribute and succeed in every room. Our whole community looks forward to seeing Karine deliver for our nation and represent every LGBTQ person with pride.”