Jonathan Knight of New Kids on the Block gets engaged to Harley Rodriguez while in Africa! 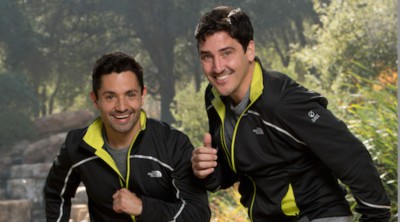 Jonathan Knight of New Kids on the Block proposed to longtime partner Harley Rodriguez while on vacation in Africa.

‘I just figured this was the time to pop the question and make it official,’ Knight said Tuesday on Jenny McCarthy’s Sirius XM series Inner Circle.

‘I went out and bought rings three weeks before we left for Africa. He had no clue.’

Knight popped the question during dinner on a raft on the Zambezi River.

‘There were hippopotamus in the background and we saw crocodiles swimming by and everything,’ Knight said.

‘Oh, and it was a super moon on top of that, so it was absolutely beautiful and so romantic.’

The couple, who competed on the CBS reality competition Amazing Race last year, has been together for more than eight years.

So what took so long to get engaged?

‘See, that’s the funny thing with two guys: It’s always hard like, who proposes? Who asks? And I think that was our problem,’ Knight said. ‘Like the whole time I’d been waiting for him to ask, he’d probably been waiting for me to ask, and it just gets to a point where somebody’s gotta do it.

‘Then the whole getting on your knee thing—I was thinking about that, too. Then I was like, “No, we aren’t really that type of couple.”‘