Jonathan Groff on making out with Murray Bartlett in Looking: The Movie: ‘He’s a great kisser!’ 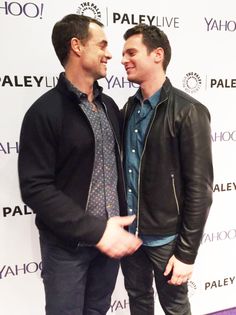 Jonathan Groff wasn’t complaining when he got the script for Looking: The Movie.


While his character of Patrick has long been torn between Richie (Raul Castillo) and Kevin (Russell Tovey), Broadway World reports that the movie has he and longtime platonic pal Dom (Murray Bartlett) getting romantic.

‘When they were writing the movie, I said, “I want to make to make out with Murray, Russell and Raul.” The rest of the movie was filled in from there,’ Groff joked over the weekend when the film had its world premiere at Frameline Film Festival in San Francisco.

‘It was fun [making out with Murray]. He’s a great kisser!’

Bartlett says of making out with Groff: ‘This chapter really showcased the rich friendship between Dom and Patrick, and how it started. It was an incredibly intimate scene between friends that can exist in the gay community. It was a beautiful celebration of that.’

Director Andrew Haigh chimed in by joking: ‘Plus, they were very excited to make out with each other.

Looking: The Movie wraps up the series about gay men in San Francisco and will premiere on July 23.

The series was canceled last year after two seasons but a finale was promised to disappointed fans.

The 90-minute finale will conclude the storylines for the three close friends played by Groff, Frankie Alvarez and Bartlett who were the core of the series.

The film will air more than a year since Looking went off the air and the plot of the finale mirrors that time period.

It has Patrick returning to San Francisco for the first time in almost a year to celebrate a momentous event with his old friends.

While he’s in town, he must face the unresolved relationships he left behind. He also must make some difficult choices about what’s important to him.