Laverne Cox appreciates the great Alexandra Billings: “Thank you for surviving. We desperately need your testimony”

Showtune Sunday: All about the beautiful ballad “Not While I’m Around” from “Sweeney Todd” 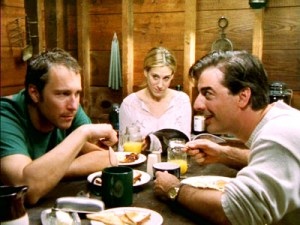 John Corbett guested on The Talk last week and dished on his bromance with “Sex and the City” co-star, Chris Noth and how people react when they see them together.

“It’s kind of insane…Chris and I, that’s 20 years ago we met, 2000, and we became fast buddies. We’re super close, we like to go out. He has a great nightclub here in New York. I’m in New York right now…We’ll go there, and we’ll have some shrimp cocktails and some martinis, and it’s bizarre. You know, I get it, I get it when people see us together. They just kind of can’t make sense of it that Aiden and Mr. Big are having a few cocktails right in front of them. It’s an odd thing for people, and I understand why.”

During his second season of “Sex and the City” Corbett confesses, “Every day they give you these little pieces of paper called ‘sides’ with your days work on it, it’s not a full script, it just says what you’re going to do in the scene and that’s it. So, I decided I wasn’t going to read any script for the whole season, so I wouldn’t know what was happening…and I wouldn’t tell anybody. No one ever busted me that I didn’t know what was happening…and I did my whole second season like that.”

Laverne Cox appreciates the great Alexandra Billings: “Thank you for surviving. We desperately need your testimony”

Showtune Sunday: All about the beautiful ballad “Not While I’m Around” from “Sweeney Todd”

Snapped! The return of Carrie Bradshaw!