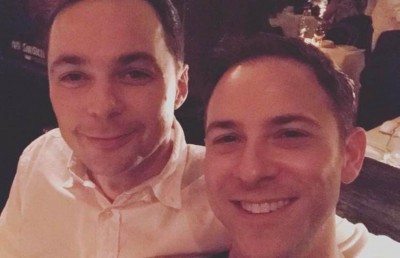 No one can say Jim Parsons and Todd Spiewak rushed into things.

After 14 years together, the couple finally tied the knot over the weekend.The ceremony took place in the Rainbow Room in New York City, according to The Hollywood Reporter.

When the couple marked 14 years together last November Parsons took to Instagram and wrote: ‘I met this guy (the one with the mic) 14 years ago today and it was the best thing that ever happened to me, no contest.’

When stardom hit with The Big Bang Theory, Parsons didn’t hide his relationship with Spiewak but on one seemed to take notice.

‘There was no going back, luckily. I took Todd along to the first award shows, as my date, and what happened?,’ Parsons said in 2016.

‘Absolutely nothing. And afterwards, nobody ever asked me: “Are you gay?”’

But Parsons did casually confirm his sexuality publicly in a 2012 interview.

Two years later when he and Spiewak were honored by the Gay and Lesbian Student Education Network (GLSEN) with its Inspiration Award Parsons said: ‘I’m not an activist. We simply live our life.’